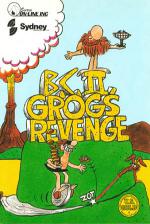 Grog's Revenge is the second game based on the BC cartoons and follows hard on the wheels of Quest for Tires. Once again, our intrepid hero, Thor, is wandering around his prehistoric world on his stone-wheeled monocycle but this time he has forsaken the neolithic plains for treacherous mountain tracks.

The game is a race to collect sufficient points so that Thor can pay a toll allowing him across a rope bridge leading to the next, more challenging level. Points are gained by rolling over coloured clams strewn along the narrow winding mountain path. The path is also covered with cracks and rocks which will smash the monocycle and, as the levels increase, these obstacles increase.

Along the cliff walls beside the path the occasional cave is found. Entering a cave causes Thor's light to go on and the view is limited to its 'V'-shaped beam. Strange little creatures scurry about amongst the stalegmites in the dark and Thor must mow these down, avoiding the rock formations, to score more points. At the end of one of these tunnels the toll booth is found and when enough points have been gained the game proceeds to the next level. If there are any points left over after the toll has been paid, a new wheel may be acquired, which means an extra life for Thor.

Where does Grog come into all this? He is rolling along the same mountain path collecting points of his own and Thor must avoid meeting him or sacrifice all his lives if he does.

The steering of the monocycle requires deft joystick control and each new level demands greater steering ability. The graphics are cartoon quality and the game, though limited in variation, is enjoyable but can be very frustrating initially until control of the monocycle is mastered.

The graphics are cartoon quality and the game, though limited in variation, is enjoyable but can be very frustrating initially until control of the monocycle is mastered.