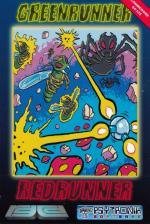 Winner of the Game Over(View) Freestyle Jam 2006? We think so.

Dubbed by many as the C64 game of 2006, Greenrunner is Aleksi Eeben's entry for the recent Game Over(view) Freestyle Jam competition and is currently one of the hot-tipped favourites to win (alongside Skull/Samar's excellent Bomberman clone preview - a review of which will hopefully be in the next issue). The game is essentially a clone of Jeff Minter's VIC-20 1982 classic Gridrunner, itself a variation of Atari's 'Centipede', but Aleksi has taken the effort to really push the game to make it faster, more intense as well as including a simultaneous two player mode and featuring some awesome sampled speech.

As with most 8-bit classics (a status that Greenrunner is most certainly destined to reach) the game-play is kept very simple. The player takes control of the Yellowizer, a yellow cross shaped craft that fires simultaneously in four directions (player two's craft is appropriately named the Cyanitizer). The player is attacked from all directions by a variety of different enemy types, which (similar to Atari's Centipede) turn into bullet-blocking mushrooms upon destruction. Power-ups and deadly crushing rocks fall down from the top of the screen, and within a few minutes of playing time the visual chaos is almost overwhelming, requiring a great deal of concentration to keep track of what to avoid, shoot and collect.

Playing Greenrunner is best described as a mind-blowing Minter-esque experience. The game graphics and colours are suitably minimal and abstract, and as should be expected from an Aleksi Eeben game the music is absolutely top notch - the SID chip has rarely sounded this good and the crystal-clear in-game speech samples are better than anything I've heard before on the C64. However, it's the game-play that really shines through - the action is relentless, and even more so when played with two players.

The only downside is that the game is very difficult, but Aleksi has thoughtfully compensated for this by both including trainer options upon loading the game and unlimited continues set as default. The intro screen gives you all the information you need to play the game (albeit in a somewhat unreadable font), and the game is incredibly addictive - every time I load it up I find myself glued to the game for at least an hour at a time. If it wasn't for the ridiculously high quality of some of the other games reviewed in this issue, Greenrunner would have most likely ended up as the 'Featured Game' - which is quite an achievement considering that RGCD is a multi-platform magazine featuring games released for machines that are many times more powerful than the humble C64.

A mind-blowing experience... The gameplay shines through, the action is relentless... and even more so when played with two players.
Logout