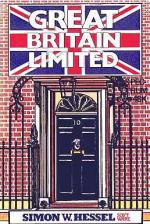 Is there anybody who doesn't think that could do a better job of running the country than the government? Well, all you need is a 48K Spectrum and Great Britain Limited and you can find out.

You are Prime Minister and Chancellor rolled into one, and you can choose whether to represent Labour, Liberal, Conservative or SDP. Your task is to juggle the economy with the aim of staying in power for as long as possible.

At the start of the game, the state of the nation is displayed, with information including the inflation rate, unemployment and your popularity. The Country Profile tells you the number of pensioners, children and companies, plus a breakdown of the revenue from all the various taxes. The Shopping Basket gives you the current prices of household items and the Retail Price index. You then get your chance to meddle!

The tax and duty rates are displayed and can be amended, as can the welfare benefits which follow. Failure to maintain benefits can lead to riots and worse, so watch out. You are also given the chance to carry out social reforms such as expanding the Health Service or building new schools. As these boosted popularity, I found it best to time them as close to the election as possible (a trick I learnt from the real politicians!). If you manage to last five years, a General Election is held, which usually led to me being booted out, often in favour of some rather odd coalitions (Labour-Conservative!?!).

Great Britain Limited is a game and not an attempt at realistic economic forecasting. Unlike real life, the effect of decisions is immediate and often drastic, such as inflation jumping from 10% to 120% in one year. But enough information is presented for a player to make very careful decisions based on the data, if he or she wishes to take it seriously. There are many ways in which this game could have been made more realistic and sophisticated, but the program would become much slower to run. I think the author has struck a good balance, and produced a difficult and challenging game.

I think the author has struck a good balance, and produced a difficult and challenging game.