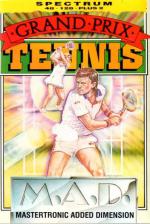 The Summer days of Wimbledon are long over, but you can recapture all the thrills (except getting soaked) with MAD's Grand Prix Tennis. It's a oneor two-player game which very sensibly includes a full explanation of the rules of tennis, even down to the most obvious ("tennis is played between two players, one on each side of a net...").

The screen design is fairly realistic, with an isometric view of the court and the umpire sitting on his little tower. The court's yellow, the players are black, the scores are at the top, and that's yer lot in terms of graphics.

As usual with this kind of game, the main skill is in timing and positioning your player. Serving is a bit of an effort; you hit the Fire button to throw the ball up, move the joystick to select the type of shot, and hit Fire again to shoot.

There are eight kinds of shot available: forehand, forehand lob, lob, backhand lob, backhand smash and smash. Your computer opponent masters these all with consummate ease; for you, things will be more difficult.

The movement of the characters is gratifyingly fast, the ball's motion is very realistic. Extra touches like the players dashing off for a sit down and a glass of Robinson's Barley water add to the atmosphere. Basically Grand Prix Tennis is very fast, requires a good deal of skill and reproduces most of the important features of the real game.