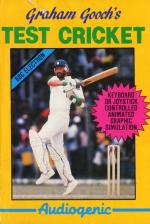 Perhaps cricket just doesn't convert well to micro format - after Bug-Byte's disastrous program I was expecting rather better from this version, especially as three programmers have had a shot at it (not through incompetence, but because of scheduling difficulties). Awaited by many since last Autumn, it has been fine tuned right up to release (a quick option screen in Basic, for example, was added at the very last minute by ASL's software manager Darryl Still in his first work for the Beeb!).

The game allows two options - either play in arcade mode or watch a match in the simulation mode. You can play another player or the computer and choose a range of games from limited overs to full Test Match. After choosing your teams and picking bowlers, etc it is time to slip into your cricket whites and start.

Which is just where the problems begin. The graphics (whilst quite attractive) are very rudimentary and there is little control over them - you can't change the fielding positions and your control over the bowler is limited to choosing offside or legside balls. Similarly the batsman is limited to attacking or defensive play. Players run for the loose ball in predetermined patterns and, unless you're content to watch the computer simulate a whole game, there is very little involvement.

All the subsidiary elements work, however, such as the scoring screens and the game's major appeal, I think, will be to those who love cricketing statistics.

It seems unfair to call this a sports simulation (at least on the same level as the rash of kung fu games) but the slow, uneventful gameplay may be just what thousands of cricketing fans are after - to many non-fans it is a slow, uneventful game after all! I may seem to be being unnecessarily harsh on this game when there's nothing really wrong with it - perhaps I was just expecting too much.

A fair attempt at a cricket simulation. I just feel that it may have limited appeal.