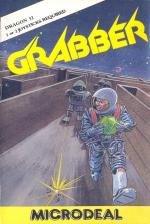 Grabber is a game for one or two players that demands fast reactions and considerable tactical skills.

At first sight the display is pretty uninteresting and the game even more so. You move round a simple maze collecting four crosses which you must transport to the centre of the screen. Once you've collected all the crosses you move onto the next maze.

You are pursued "Pac-Man fashion" by monsters but there are also four power pills which you can swallow, giving you a brief period of superiority over the opposition, during which time you can kill them.

What makes this game so tricky is that there are *two* mazes on the screen at once. You can switch from one maze to the other by pressing the fire button and each maze has a slightly different layout.

This means that you can travel down an alleyway in one maze until you reach a wall, then swap over to the other maze (which has no wall in that position), continue on your way, then swap back to the first maze.

Sounds complicated? It is, especially when the monsters are after you. To make matters more difficult, they will also steal your carefully collected crosses from the centre of the screen and redistribute them around the maze, making life very trying indeed. You have to collect the crosses in both screens to move on to the next level.

The graphics aren't anything to write home about, but there's some good sound (by Dragon standards) and the complexity of the game means that you'll need a lot of practice to get your name on the high-score table.

The graphics aren't anything to write home about, but there's some good sound (by Dragon standards).