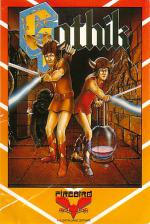 Don't dismiss Gothik as just another Gauntlet clone, or just another Dungeons-and-Dragons role-playing game. Although it's pretty close in many ways to Firebird's successful Druid, Gothik seems to have greater depth of gameplay and more thought behind it.

Set in the usual maze of catacombs, viewed from above, Gothik features the muscle-bound Olaf and the mystical Olga, who look pretty similar apart from Olga's extra two pixels. Olaf is better at the strong-arm stuff, and Olga at magic, as you'll see when you access the status display by pressing the space bar.

This display shows the potency of your three main weapons - arrows, fire and lightning bolts - and whatever charms and spells you have collected on the way. In the centre of the screen is a skeleton, parts of which glow as you discover pieces of the wizard which are the object of your quest. There are seven levels, each with four sub-levels accessed by transporters. Of course, the catacombs are also haunted by sundry nasties, including giant gorillas, walking eyeballs, and, at the end of each level, a guardian demon who can only be defeated with the right combination of spells.

Sixteen different potions can be found in the mazes. Some of these are helpful, giving you extra speed or strength, increasing the power of your weapons or disguising you to confuse the guardians. Some are worse than useless, taking away your strength or speed, or even reversing the directions of your controls.

If you collect gold, you can exchange it for extra strength or magical power if you are running low. It's also worth bearing in mind that there are some situations where you will find yourself trapped unless you have sufficient fireballs or firestorms to blast your way free.

Unless you pay attention to what you're doing, it's rather easy to spend a long time wandering around, using up potions and zapping the baddies without achieving anything. It's best to make a map and to concentrate on finding particular objects which you need to complete your quest,. In this sense, Gothik isn't much fun if all you're looking for is a quick blast. It seems the sort of game where you require a lot of time and concentration to get anywhere, and it's a pity the graphics, especially of some of the monsters, aren't quite up to it. Still and all, as Conan the Barbarian used to say, an absorbing and worthwhile fantasy adventure.