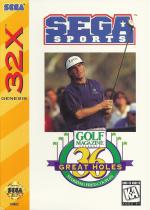 With a name like Fred Couples, he was all set to be a gameshow host. Perfect for the likes of the long defunct Mr and Mrs (Be nice to each other). The catchphrase was ready and waiting: "I'm Fred Couples, now let's bring on the couples!"

But instead, Golf became the career path of the mysterious Fred (well, mysterious to us on this side of the Atlantic). The slacks and V-neck pullovers were regulation gameshow, but the setting was pastoral and the action fast and furious. Well, fast and furious compared to putting Ethel in a soundproof box with a pink frilly blindfold on. And it came to pass that even slacks-wearers were buying Sega's new subversive console add-on, the 32X. And they fancied a next-generation stroll on some choice greens and fairways. So Fred agreed to front a collection of 32 "great" holes, a sort of "Pantene Pro V par excellence" of golf products.

Endorsed by America's Golf magazine, and concerning the ancient game of stick and ball originated at St. Andrews.

Cover a set series of holes (1-36) in as few strokes as possible, with other minor game variations on offer.

Before you start knocking balls, you must define your player. The battery save is capable of storing dozens of your created golfers, and also recording the statistics of their performance whenever you play with them. First, a series of mugshots of cosmetically-challenged men and woman are offered, then a potentially lethal choice of tops and bottoms in the apparel department. You can also have a rummage in the contents of their golf bag; select your allowed fourteen clubs from the range available; even change shaft and head materials.

Lastly, you select your tee colour. This determines which of the four tees you commence from. Picking the red (nominally the 'Ladies' tee) brings you a lot closer to the hole than the blue or black.

Preparing the shot or 'addressing the ball' is an important procedure for the perfect shot. The following functions should be used before you swing it:

The swing mechanism is almost identical to that of EA's PGA series, reinforcing the noticeable similarities between the games.

One button tap starts the power meter, another stops it at the desired amount, then a final press is required to time the swing to avoid hook (bend to the left) or slice (bend to the right).

The 36 holes on the cart are cherry-picked from some of America's top courses, giving a good mix of short and long, woodland, links and desert courses. Some noticeable attractions are those with island greens set upon huge water hazards.

Derivations of play are offered with Fred's favourite holes, a long 18, short 18, toughest holes ('The Gauntlet') and an option to create a custom course of any length.

Yet another one to add to my collection of famous Freds, but the game Mr Couples fronts isn't as illustrious as we might have hoped.

Despite the potential of the 32X, the graphics are surprisingly drab, fuzzy and unexciting. Mottled greys and greens exist where crisp trees and lush grassy textures should have made this the best-looking golf game by some distance. In reality, I can see very little difference between this and previous PGA games on the Megadrive.

Apart from the limited commentary, it's even inferior in terms of sound to PGA III! The player customisation is good, but the real letdown is the lack of holes.

36 just doesn't compete with the incredible 144 up for grabs on PGA III. Okay, these are 'choice' holes, but they're not my choice. 36 Great Holes is barely on par with most Megadrive golf games, but it's not the 'next level'. Wait and see what Tee-Off has to offer.

Well, the animation is well nice, the courses are detailed and varied, and there are enough options to keep golfers happy.

But, despite all these, 36 Great Holes still doesn't compare to the likes of PGA III. It isn't a bad game by any chalk, and it pushes what the 32X can do, but I still came away unimpressed.

The problem lies in that it doesn't feel like a 32bit game, and bearing this in mind, I'm in the queue behind Gus for Tee-Off.

Sound 68%
N. Not much in the way of sound or music, despite the occasional comment or birdsong.

Playability 77%
P. Playing as a group can be entertaining and not any less playable than most golf games...
N. Lacks features and depth that the unit might have provided.

Lastability 68%
P. Recording the stats of your created players is good news.
N. 36 holes is well below the count of comparable golf simulations.

Value For Money 65%
P. Not a serious improvement on EA's three year old standard, and that's now much cheaper.

Overall 73%
Not that bad in its own right, but the golf games for your Megadrive are every bit as good.

Not a serious improvement on EA's three year old standard, and that's now much cheaper than this 32X-only number.
Logout