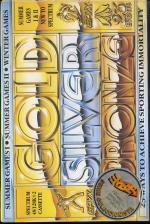 Ask any self respecting Commodore owner (Isn't that a contradiction in terms? - JD) what the best sport sims are. and (s)he'll reply 'Dur.

The Epyx ones.' Until now.

Speccy owners have only had access to one of the three classics, but now US Gold comes, like a flash of lightning, to the rescue, with it's latest compilation, aptly titled Gold.

Silver, Bronze. Now, as well as the original Winter Games, you now get Summer Games 1 and 2. How's that for a bumper package? Unfortunately, it's not as good as it sounds. To put it simply. Summer Games 1 and 2 have suffered considerably in the conversion. "Rush job." is one of the phrases which spring to mind. "Bodge up," is another.

The layout of the three games is basically the same. You are presented with a main menu with all the basic options such as Define controls. Practise an event. Play all or some of the events, and See World Records.

Unlike the 64 version, sadly, you can't save the World Records, so there's just a bit of general competitiveness lost there. Once you decide that you've admired the splendid lettering and the attractive choice of colours, and have selected 'Play an tevent'. you have to enter your name and country of your choice. In Summer Games, country selection is done via a scrolling display of flags. In the sequel, however, you are presented with a text list and a cursor. A bit of a let down methinks.

Still, you've done all your bits, it's off to the games, and what a lot of them there are. 23 in all. If you decide to play them all. they are in order from Summer Games 1 through to Winter Games: Pole vault; diving; 4x400 metre relay; 100 metre dash; gymnastics; freestyle relay; 100 metre freestyle; skeet shooting; triple jump; rowing; kayaking; javelin; high jump; fencing; cycling; equestrian; figure skating; free skating; speed skating; hot dog ariels; ski jump; biathlon; and bobsled.

You'll be pleased to know that Epyx have thankfully veered away from the joystick waggling found in all the other sports sims. Well, in most events anyway. Some events (speed skating, rowing) still require rythmic left/right movements. Others (gymnastics, high jump, hot dog ariels) require skill and timing. This all comes together to provide you with a package that has enough variations in gameplay to keep you interested for quite a while.

The thing is, for a game to hold your interest for any amount of time, it has to play well. I found the new games on this package slow, unplayable and generally not deserving of the reputation the Games series has attained. Poor, badly defined and animated graphics, slow jerky scrolling and horrendous colour clash don't make this game a very attractive package. They make it downright unattractive.

Sound is nothing special. This is an area that USG could really have tapped into. The thudding as your runner beats the track, the spring of the board, the whoosh of the foil. Is that whet you get? No. you get 'beep* if you do something right, 'beep' if you do something wrong and 'beep' while you're doing it.

Winter Games is this package's only redeeming feature, with some great graphics and some snazzy toons. I expect you're able to get that a lot cheaper than the asking price for this collection, too.

GSB was a compilation that I was really looking forward to seeing. Looking at it now, I can't imagine why. I think I'll go borrow a 64 copy from somewhere.

Disappointing sports collection. It'll last you a while but only 'cause you have to multi-load all 23 events.

Disappointing sports collection. It'll last you a while but only 'cause you have to multi-load all 23 events.
Logout