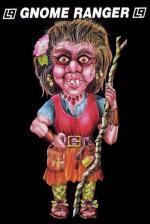 Remember the good old days when Level 9 were independent? They treated the adventure world to masses of text and puzzle solving in their never-to-be-forgotten epics such as Snowball, Lords Of Time and Adventure Quest. It appears they wish to go it alone again with their new title, Gnome Ranger, although they have by no means broken off their association with Rainbird, as future releases will demonstrate.

Ingrid Violet Bottomlow is a bossy, thick-skinned gnome who is eventually banished to the wilderness by her exasperated family. The basic aim is to get Ingrid safely back home, while sorting out some local problems on the way.

The first thing I have to mention are the graphics: they're very nice - not quite up to Magnetic Scrolls' standards, but a vast improvement on the usual Level 9 pictures. What is interesting is that they load separately from side two of the disk, thus demonstrating that all of the memory has been used for the text, a method which the Austins have utilised throughout their adventure career, using only the spare bytes for graphics.

The amount of text which Level 9 squeeze into the C64 is near mind-blowing. Screens and screens of text slowly scroll up as events and locations are vividly described. The parser itself is very acceptable, with the now almost expected ability to understand such inputs as TAKE ALL BUT THE BELL and CENTAUR, TELL ME ABOUT YOURSELF. The player may also FOLLOW another character, FIND a certain object known to exist within the adventure, or even RUN TO or GO TO any location.

There are times when Ingrid needs to locate an item to enable her to placate or befriend a creature, so it in turn helps her with the quest. These inhabitants are mostly friendly, and are quite articulate in conversation and carrying out orders. They can do little jobs for Ingrid while she concentrates on the more important tasks, and they even report back to her when the job is finished.

The adventure comes in three parts, each of which is completed before the player proceeds to the following section. Positions can be loaded or saved to or from tape, disk or RAM, and the very useful OOPS command can be used to take back a move should it prove fatal.

The graphics may be dispensed with entirely, or raised bit by bit with the cursor keys. Text can be defaulted to brief or verbose, and the command AGAIN repeats the last input.

Gnome Ranger is a very professional, highly interactive adventure. The pretty pictures add to the already adequate ambience created by the text, and the parser is intelligent enough to deal with most inputs. The only grudge, and there had to be one, is the game's slowness, but even this does not detract from the playability. I would like to welcome Level 9 back to the top three in my adventure writers' chart... and let's hear it for the price!