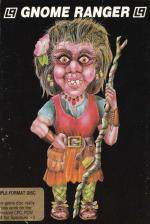 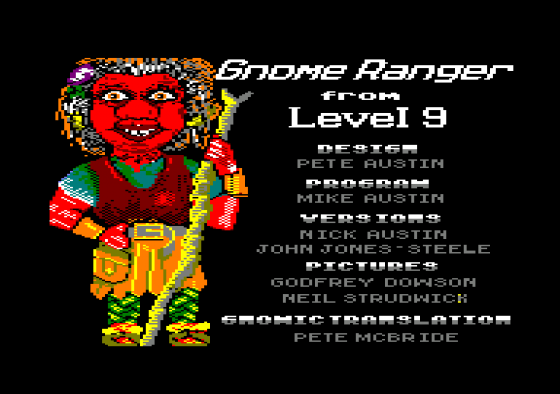 It's a little embarrassing, one would have thought, for Rainbird that the delay over releasing Knight Orc should have led to a situation where a later, better game is released for £5 less! Such is the case, however, as Level 9 move away from their co-publishing deal with Rainbird (amicably, I should add, and not necessarily permanently) to release their first "own-brand" game since The Price Of Magik.

Gnome Ranger presents a marked improvement over Knight Orc. First, the game scenario is clearly defined from the start. Second, the locations are better described. Third, the atmosphere within the game is less chaotic than its predecessor. There are fewer characters but everyone you meet is significant in some way or other. Furthermore, the characters have more life to them and appear as more convincing personalities within the game.

The storyline follows the adventures of Ingrid Bottomlow, a female gnome who has been banished from home by her exasperated family. At least, we assume that this is so - Ingrid certainly has an officious side to her nature that would render her liable to banishment in any normal family. The "faulty" teleport scroll that dumps her outside a small shop in the middle of unknown territory sounds a little too good to be true... 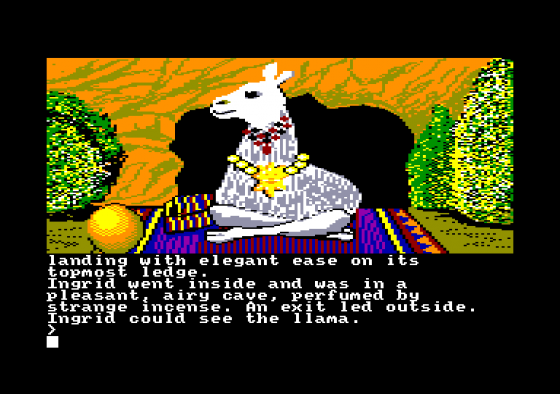 Your challenge, then, is to go home. But instead of just setting out along the high-road, you find yourself embroiled in a number of personal problems. I should add that these are other people's personal problems, but, Ingrid being the sort of gnome she is, this doesn't stop you from getting deeply involved.

The game falls into three sections and unlike Knight Orc you can't move between them at will. In section one you must reunite a gnymph with her lover, rescue a furry friend, find some filthy lucre, and finally rid the land of a witch who runs a small business based on stone gnomes. Succeed in cracking all these puzzles (and a couple more) and you'll be carried shoulder-high into the next section.

Section two is quite different. Whereas the first part of the game had you bringing people together, the second part puts more emphasis on magic and herbs. You will need the help of a number of different personalities to find and properly use the various herbs required to create a potion capable of reviving an alchemist's tea plant (which you have accidentally damaged).

The third section presents yet another theme, this time involving various warring factions whom Ingrid must reconcile. The Fire People and the Ice People face each other in this final part, thus concluding the game's overall theme of Animal, Vegetable and Mineral. Throughout the adventure, the player will, as in Knight Orc, have to befriend or otherwise recruit the assistance of a number of characters in order to achieve his/her aim.

I have only two reservations about Gnome Ranger. The first is the continued fantasy scenario. It's a long time since we saw a game from Level 9 that was neither science fantasy nor Middle Earth antics. Lords Of Time, although long ago, seems like a breath of fresh air in retrospect. My second quibble with the game is that it is very slightly 'twee'. It isn't an adventure that's going to get your pulse racing; it may amuse but will never give you hysterics; it will puzzle you but never confound you. In short, it's a rather middle-of-the-road game, albeit an improvement in style over Knight Orc and in programming over previous releases.

Peter Austin tells me that he's currently researching a game for Level 9 based on the Arthurian legend. Now that sounds like a game with muscle, magic, and passion. Watch this space...

A rather middle-of-the-road game, albeit an improvement in style and programming over previous releases. 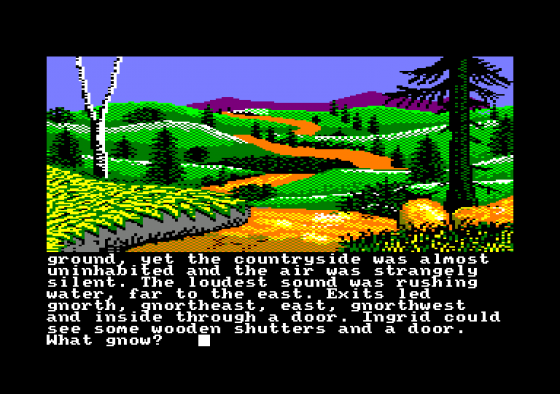