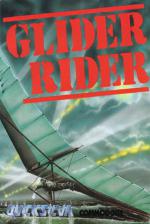 Glider Rider is Quicksilva's latest but unfortunately not greatest release. The game is terrible in all respects except sound.

Glider Rider is not the sort of game that your average Commodore owner likes to spend their hard-earned cach on. The game is slow, graphically minute, and almost completely colourless.

The plot of the game is good. Destroy ten mini power stations and rendezvous with an awaiting submarine. Real James Bond style stuff. But when you play, the only Bondish bit is the fact that your motorbike turns into a hang-glider.

Yes, using very tricky manoeuvre, you can change your bike into a glider which floats around the screens. That is until it gets hit by a really blocky laser, the kind you used to see on ZX81 games.

You have nine grenades with you, which you must use to destroy the reactors. As there are ten of these you must obviously collect more ammo from the somewhere on the island.

After several hours play (four in all), I didn't discover anything new about the game. It didn't pull me in or even slightly excite me. The game is a no no.

The only good thing was the music, which kept pounding away. It seems a shame to waste such a good soundtrack on such a naff game.

The main display is the island. An island apparently made entirely of plastic so it's not detectable by radar. I've read some silly plots in my time, but this one...

You drive your bike around various hills, roads and forests, passing by lasers which greet you by putting yet another hole in your head, too many holes and you die, ending up as a bacon flavour crisp.

One thing that gets me is you can only throw grenades from the glider, making the power stations almost impossible to hit. Would it not be simpler and more realistic if you could throw them whilst on the bike?

When you finish the game, you connect your bike engine to the glider and sail away. Ha! You show me someone who can do that in about twenty minutes, let alone twenty seconds.

A rather poor game if ever I saw one. I thought it was going to be good after reading the plot, but was disappointed. Don't make the same mistake.

A rather poor game if ever I saw one. I thought it was going to be good after reading the plot, but was disappointed. Don't make the same mistake.