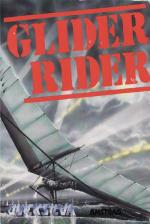 Glider Rider pits you against an enemy fortress, guarded by nuclear fortress powered laser defences, your only transport a motorised bicycle and a collapsible hang glider! Luckily, there is space in your hang-glider to carry nine hand grenades with which to knock out the reactors.

The game has a 3D display with all the installations, scenery, sea, and other assorted paraphernalia displayed on it. The scene shifts as you approach one side of the screen, which is a bit disconcerting, but you can't get smooth-scrolling on an Amstrad if you want any kind of quality in the graphics due to the enormous amount of memory that the screen takes up (around 16K).

Your little man has his yellow moped which can move around the screen, but not through the usual impassable objects, such as trees, bushes, fences, and the like. Conversion to the hang glider mode is achieved by running down a hill and then back pedalling, it's then a good idea to try and gain some height before you crash into a tree! It's only in this mode that you can drop the hand grenades.

The object of the game is to destroy the external power reactors in order to gain access to the main fortress - an imposing building with a high fence around it and heavily laser-defended.

Each reactor is defended by a nearby laser turret. The trick is to cycle into a nearby electricity pylon which will make the laser go momentarily crazy, you should now convert to the glider mode of operations, fly over the reactor, and then bomb it. Much easier said than done. The reactors look like spheres but very satisfyingly end up looking like a cracked egg when destroyed!

Once all the reactors are destroyed, you gain entrance to the fortress, and the game suggests that you turn into a microlite by combining the bicycle's motor with the hang glider, but not having got this far I don't know what happens next.

Overall this is an extremely challenging game, with the emphasis more on the tactical side of play rather than any other genre. The game is fun to play and very puzzling, and should prove difficult even for the most experienced Gamer reader.

This Amstrad version of a Spectrum game is a straight conversion, complete with the narrow Spectrum-like screen and monochrome graphics, through the sea is slightly different and doesn't look so good as on the Speccy. Other than that (and a bright yellow bike and rider) the game looks the game as the 48K version of the Spectrum game, though the music of the 128K version is there.

More could probably have been done, but the game is OK as it stands.

The game is fun to play and very puzzling, and should prove difficult even for the most player.