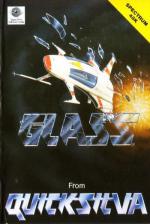 Glass, believe it or not, is a flight simulator but one designed for a very special task which is to train you for a specific task. With the aid of Glass you must acquire the skills needed to be a starfighter pilot. The problem, you see, is that the planet Hygon has been taken over by a bunch of clever but nasty aliens. They have built three citadels which act as bases for further military expansion. The citadels are heavily defended and only good pilots stand a chance of destroying any one of them let alone all three.

The simulator has been designed to test your abilities to the limit as you must destroy hundreds of droids before you even catch sight of a city. For most of the time the action takes place on the planes of Hygon which is a pretty boring sort of place to be, mostly because the surface is reflective, flat and devoid of just about anything except, of course, the droids. You are going to meet three main types of droid, the first are sproingy bouncy ones, you know the sort, they never seem to sit still long enough for you to kill them, but you must if you are to avoid being killed yourself. The second class of droid appears to be patrolling a boundary, in herds. They march, relentlessly, from one side of your view-screen to the other happily lobbing tennis balls at you, only these balls do nasty things to shields. The last breed of droid is bigger but less bold, they cower over the horizon and then pop up and fire at you.

The simulator has two other hazards for you to cope with. Firstly you are given practice shooting up enemy ships as they sidle past your viewscreen. Secondly, you experience the thrill of flying across the less boring parts of Hygon at low level and at high speed. The simulation gives the appearance of travelling, on a high speed Fly-mo across a very large graveyard complete with highly coloured grave stones. When you collide with one of the 'headstones' your shield suffers damage. Many alien deaths later you reach the first citadel and a nuclear warhead is launched against it automatically, letting you sit back, relax and watch the spectacular end of one of the cities. But not for long, one down two more to go.

You're equipped with twin rapid fire lazers, centred on the screen so aiming is done by moving the craft from side to side. Points are awarded for hitting enemy targets and the first 20,000 are hard work, after which the bonuses are generous and top scores can well go into the millions. A score such as that would earn you the highest title of 'Game Lord' but more often than not early missions will attribute less flattering ranks to you like 'Galactic Dustman' and 'Commodore Owner'. There is an infinite lives option but scores from each mission are not cumulative you can't become a Game Lord by cheating you know!

'I am very impressed with the graphics, they are very attractive, very smooth and delightful. To be honest the game itself is really nothing more than a shoot em up but what's so bad about that? The sound is almost up to the standards of the graphics so that helps to make it exciting, as do the huge variety of alien beings - seldom will you see the same creature twice, In between conflicts with the aliens your craft passes through a most alluring transition, best described as a journey by a slice of high speed cheese through the middle of a sandwich made with chequered bread. One scene reminds me of 3D Deathchase but much faster so it's quite thrilling. My only reservation is the price, I admit the graphics are superb but it is a little steep'

'This game is instantly appealing in the sense that everything is graphically 'fast' and fairly detailed. But there didn't seem to be much of a game to it. Various sequences have some nice effects and, in the main, the game is built up of effects - the warp effect is the best I've seen on the Spectrum. Speeding through the towers is difficult because they come towards you at such a rate and the key responses don't match that rate, which adds a bit to the forward thinking. Another nice touch is that you can continue with your game from the point at which you were killed. As a game I can't really recommend it, although if you're into effects, it's nice to see what can be done and it gets very fast'

'I enjoyed playing Glass as it didn't get boring. The graphics were so varied that I only saw each type of alien once. The sound was well used and gave the game a bit more depth, the graphics apart from being very varied were very well drawn and perfectly animated and all the 3D effects worked very well. As a shoot em up Glass is very addictive and playable, in fact I only have one main niggle and that is that you don't have sights for your laser so you can only guess what you are going to hit. I played it all the way through, (it took about four hours to complete) and the final screen was well worth it.'

As a shoot-'em-up, Glass is very addictive and playable. In fact I only have one main niggle and that is that you don't have sights for your laser so you can only guess what you are going to hit.