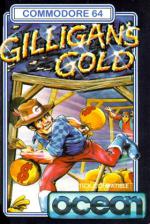 Gilligan's Gold is about a miner who is trying to collect all the gold bags in the mine shafts and put them in his wheelbarrow at the top of the screen (Sounds familiar!). Well, Gilligan is a very close copy of the arcade game Bagman, where you are under constant chase by two outlaws who you can stun by either dropping bags of gold on them or hitting them over the head with a pick-axe (Ouch!) but in the end it's usually you who ends up dead.

At first glance the screen looks very plain but as you move further along the screen, you eventually see trucks and lifts which you try to get on if the outlaws aren't having fun riding up and down in them. One of the most annoying things about the game is you are under a time limit which you can reset by putting the gold bags in the wheelbarrow - but that's not easy if one outlaw won't get off the lift and the other one is in hot pursuit of you. So in the end you usually end up running out of time and having to start all over again.

Overall, the graphics and music make it an addictive game to play.

The graphics and music make it an addictive game to play, although it does have some annoying aspects.