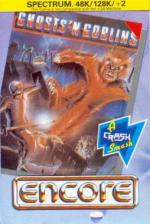 Do you wanna see something really scarey? No, you'd rather play a coin op wouldn't you. Well look no further Mr Albert Mucus of Harrowgate, because GHOSTS 'N' GOBLINS, the authentic Spectrum version of the classic Capcom arcade game is now available at a silly price courtesy of Encore.

Those of you who've never heard of it must have been dead for the last few years but for those of you who missed it first time around here's a quick rundown.

You are a faithful knight and some evil fiend with leathery wings and a nasty case of demonic possession, has run off with your girlfriend. Don't worry now; you don't think that she'd run off with him of her own free will do you? No, certainly not. Well it's up to you to strap three hundredweight of armour to your lovelorn body and go off and rescue her. (Ahh my hero).

Play begins in a graveyard and everything is as quiet as a grave - but not for long. Being absolutely appalled by fleshy ones, bodies rise out from the ground with one soul (sic) purpose - to relieve you of your life. A few well thrown swords will put paid to them as you leap over gravestones on your mission of love. (Yuccckky!) You can collect gold that some monsters will leave behind once you have (re)killed them with the sometimes leaving extra weapons behind which can be swopped with the one in current use, each one having it's own particular advantages.

There are six levels, each one trickier than the last and the game progressively gets harder. The graphics are disappointing, but after playing any arcade conversion, I feel this is usually the case.

I felt a little let down that there was no Sinclair joystick option on the tape which led to me using the keys and proved to be extremely difficult. This aside, GHOST 'N' GOBLINS remains a classic game and this is a competent conversion, although some of the colours used make following the action a little tricky.

Some garish graphics let it down.

There are six levels, each one trickier than the last and the game progressively gets harder.