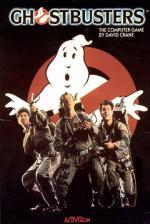 Being an examination of paranormal activity in a computer game related to a motion picture of considerable fame...

Now your average ghost is not the most hilarious thing in the world. Like, it's a manifestation of something dead - like deceased. The unliving. Your basic phantasm has been consistent subject matter over the years for movies that have you reaching for the barf bag rather than rib-binding tape.

But then there's Ghostbusters; a film that breaks the rules and offers up your white-as-a-sheet stereotype in a chucklesome format. In the U.S. crowds flocked to see it, making it the movie that most marketable of all properties, a box office smash. Small wonder then, that along with all the T-shirt, badge, toy and sticky sweets makers came Activision with plans to produce Ghostbusters: The Computer Game!

Games-of-the-movie have not had a brilliant track record to date. Who can forget Atari's fumbled attempts to translate E.T. into video games? However, with reservations (which may, or may not, be revealed later), I think Activision might just have got the formula right with Ghostbusters.

One word of warning before we plunge headlong into a close examination of the game, you *must* like Ray Parker Jr.'s finger-popping theme tune. I mean really *love* the thing to the point of obsession. Because once this game starts, the damn thing just won't quit! A music panic button should have been mandatory.

Okay, so you're a Ray Parker Jr. groupie and the game has loaded. The title screen comes up, the music starts and on comes the bouncing ball to help you sing along with the lyrics that scroll up the screen. No kidding. This was the only time I could've used that barf bag. Pressing the Space bar punctuates the music with the yell "Ghostbusters!" in impressive, natural-sounding speech. This, and a couple of other bits of dialogue, in the game are produced by a system called Software Speech - a big bonus for C64 owners.

Pressing f1 or f3 starts the game. You are applying for a Ghostbusters franchise and need funding. You can either input an account number or, as a new customer, accept a flat-rate $10,000 loan.

The 'account number' is gained after successfully completing one or more games. Activision claim that the code can be used on any version of the game anywhere in the world. So remember, wherever you go, don't leave home without your secret Ghostbusters number - you never know where you might find a game.

Cash in hand you move onto selecting a suitable vehicle for your operation. Four are offered, ranging in price, speed and capacity from a VW beetle to a high-performance sports job. Next is equipment selection. Check out the goodies on display: PK energy detectors, image intensifiers, ghost traps, ghost vacuums, a laser confinement system, and more. Equip your vehicle according to your budget and you're ready to tackle those spooks.

Out on the New York streets, things are getting heavy. Slimers terrorise apartment blocks and Roamers are converging on the Temple of Zuul in ever-increasing numbers. A real bad trip is in the air.

Check the streetmap display for Slimer alerts and work out the shortest route to the target. Thumbing the joystick Fire button switches to an overhead view of your vehicle barrelling along the street. If you have a ghost vaccum on board you can suck up any Roamers on the way. At the target zone, two of your Ghostbusters deploy a trap and attempt to lure the Slimer into it using their negative ioniser power packs. Should the ghost escape the ion streams one of your men has had it. Software Speech kicks in with "He slimed me!" and you're looking for a new Ghostbuster. Worse still, should the streams cross both men go down. It's a tough, dirty job but someone has to do it.

Successful entrapment gains a triumphant "Ghostbusters!" shout, boosts your bank balance and you're back cruising the streets looking for work.

So it goes with calls back to Ghostbusters HQ for fresh supplies and more men. All the time the game is picking up speed and periodically enough Roamers get together to form the dreaded Stay Puft Man.

I really got to hate this 100ft, high pile of walking marshmallow. Not only does he trample over buildings, you have to pay for any damage caused. Just when I was beginning to build up a healthy bank balance on he stomps to lose me four thousand bucks per block! Get rid of him, quickly.

Ultimately, you must confront the terror of Zuul and get two men into the Temple entrance. This is not so straightforward as you have to be well in credit when that moment comes. Needless to say, the Stay Puft Man has prevented me attaining this state as yet.

This game is really lifted by the sampled dialogue.