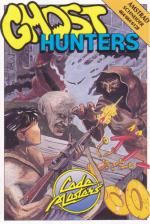 Staying Power 71%
P. Mansion is complicated with lots to explore and find.

Overall 68%
P. A good follow-up to Super Robin Hood, but not as playable.