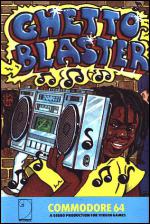 Ghettoblaster marks yet another release from the Virgin software stable; this time under the guise of Gimbo software.

Basically, the story revolves around you, armed with a Ghettoblaster (a large cassette machine of the kind that are sported around like suitcases) and some of the strangest characters yet seen in a computer game. In the game, you have to fire musical notes at them to make the inhabitants of this computerised 'Empire Road' dance.

The story goes this, you are 'Rockin Rodney' who, after a stint at unemployment, finally gets a ob as a messenger boy for a record company. He has to deliver ten demo tapes to the head office of the record company who employ Rodney, before the end of the day. It is also Rodney's job to make sure that people hear the music from his ghettoblaster and get them dancing.

Naturally the game has its contingent of people who are either "tone deaf" or who generally act in an unpleasant way about the music being blasted at them.

Among these people are policemen who try to attack Rodney and break his ghettoblaster. Thus stopping him from both getting the people to dance, and also from delivering his tape.

The graphics are quite well implemented, they are smoothly displayed with the option to cross the road and to search for houses on the other side to take the tapes to and from the Interdisc head offices.

But sadly, the graphics are all that is good about the game. The so-called twelve original tracks of Rockin Rhythms are repetitive and quite annoying after a short time, there are also some serious bugs still left in the game. For instance, if you should enter the park, then the top of the screen starts corrupting with garbage characters destroying part of the top line, although the mushrooms in the park are a nice feature, with Rodney proclaiming "I feel inclined to blow my mind".

To make matters worse, the garbage gets more and more common in other screens, in a short while, the places in which you visit (named in the top lines) are soon unreadable. Another 'feature' is that after any length of tme, there are no 'ordinary' people left to Ghetto Blast (only tone deaf walkers) to play your music to, thus stopping you from effectively playing the game, and gaining points.

The storyline is exceptionally banal, for a game of this price; the music, while being well implemented with some nice 'Dub' effects, soon becomes extremely annoying and distracting. Luckily, there is a feature to lower the volume on the Ghettoblaster display at the bottom of the screen.

This is a very poor implementation of a game with a sound concept. The idea of delivering tapes and from houses in a loose arcade adventure style format, is a good one but sadly the idea never makes it off the conceptual stage.

Until Virgin or Gibbo software take out the bugs, make the game a little more exciting, and bring a game of this standard down to a low enough price (considering other games of a much higher standard at this price), I would certainly not buy this game... my final comment is forget it.

Until the bugs are removed, the game is made a little more exciting and bring the game down to a reasonable price, I certainly wouldn't play it.