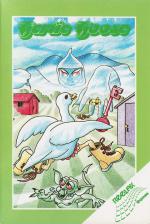 Gertie Goose is a tough bird who spends her time, like most geese do, laying eggs, eating and generally enjoying life in a goosey sort of way. All of a sudden these halcyon days are rudely interrupted by the arrival of an evil and vicious Demon King and his horrible minions. This diabolical character decides to ruin Gertie's life and steal her eggs, what a rotter!

He does so, and wheels them away to his numerous inner sanctums in the depths of the forest where they look like doors sticking out of the landscape.

This is where you come into the game. Playing Gertie, you have to enter the forest, find the keys to the various inner sanctums and recover the eggs. The Demon King, being a really, really nasty piece of work has left his soldiers to guard the eggs and prevent Gertie from rescuing them.

The game takes place over a multi-directional scrolling landscape and is viewed from a camera perspective (like International Soccer). The landscape is littered with trees, rocks and other obstructions which hinder swift progress through the forest.

To get the eggs, Gertie must first find the keys to the inner sanctums. These are dotted around the forest and are picked up automatically when run over.

When a key is picked up, one of the doors of the inner sanctum flashes. If you touch it then you are allowed entry and can pick up the egg. Care has to be taken though; each sanctum has a soldier guarding it and if he touches Gertie then a quarter of the egg is lost to the Demon King. If, when Gertie has collected all the eggs, the Demon King has more eggs than Genie then you lose. If Genie has the most then she wins and the Demon King is dispelled and she's free to live her own life again like all liberated geese should merely awaiting retirement - and the eiderdown.

Throughout Genie's search she is pursued by the evil one's soldiers which makes it difficult to collect more pieces of egg than the Demon King. If you manage to solve the game, though, you can up the difficulty level on the title screen and try again.

Gertie Goose is a very simple game indeed, in both its looks and gameplay. The graphics are pretty awful with a terrible colour scheme that really wrenches the eyeballs. The backgrounds are extremely basic and the main character is flickery and keeps changing colour (rather like attributes on the Spectrum).

The sound is awful too, mostly consisting of parps and poops. This type of game looks very dated - like the sort that you'd have bought in 1983 and felt disappointed with even then. There's no way that it should sell at £7.95 - £1.99 would still be too expensive...

Have the Reelax people come through a time warp from the past? We've had three games to look at, and they all bear the hallmarks of extreme age, in ideas, execution, sound and appearance. It seems odd that anyone should want to program them, let alone market them!

This is a shame since it's always much nicer to welcome new software names than to have to pan them. Gertie Goose has better graphics than One Bite Too Deep by the same publisher, but that's not saying much; the game, too, is marginally better.

When told that Gertie Goose is to retail for £7.95, I honestly thought it was a joke. Most companies' budget ranges do not deserve this as one of their titles. Even in the dawn of C64 software development titles of a standard like this where only produced by the true pioneers of bad taste.

The graphics are awful, all the colours that don't hit it off in combination have all been employed to create a pizza-like effect. To add to the nausea-inducing colour scheme, all the sprites epiletically canter around the screen.

Reelax should sit back, look at their product and do something else. I'm afraid that Gertie Goose has managed to slip totally below my contempt. To quote a man much admired, "Reelax, don't do it."

Hookability 19%
The game is very simple...

Lastability 9%
...and consequently it palls swiftly.

Value For Money 12%
Much too dear for such an outdated game.

Overall 14%
May appeal to the very young, but only may.

This slipped beneath my contempt. It may appeal to the very young, but only may.