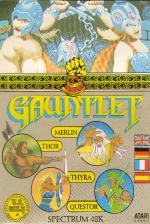 Gauntlet on a Spectrum? Rubbish! Or perhaps not. Mike Roberts takes up the challenge

This is the home version of the Atari coin-op Game Of The Decade, the "four player at a time" game of adventure and role-playing that everybody thought would be impossible to convert to any computer, never mind the humble ZX Spectrum. US Gold have proved everyone wrong with a version of the game that is similar to the two player variant of Gauntlet that came into the arcades a few months after the original four player version first emerged.

The plot of the game is very straightforward. You and an accomplice descend into the depths of a treasure-filled dungeon. Evil nasties abound, and you need keys, food, potion, charms, extra equipment and lots of other odds and ends to survive. Occasionally, you find a treasure room where there is masses of treasure and no monsters, but it's a race against the clock to find the exit in time to pick up your extra bonus...

In the original coin-op game, four people could play using the four characters that the game provided. Elf, Wizard, Warrior and Valkyrie. Each character has a number of good and bad points to it. For example, the elf is fast, but isn't as strong as the slower moving warrior, the valkyrie has medium ability at everything and the wizard fires magic balls and has a more potent magic capability than the rest but little hand-to-hand fighting ability. The US Gold versions of the game only lets two people play the game at once. Which two, from the initial four, can be selected at the start of the game from an attractive menu screen that is taken straight from the headboard illustration of the actual game.

One of the big features of the original game was the option for extra players to join the game whilst it was in progress. This is also supported on the Spectrum version of the game. Even if the one player option has been set, a second player can join the game by pressing the second fire button on the keyboard. He will then pop into existence as one of the other three characters (chosen at random) and start playing the game with his full compliment of 2,000 health points.

The implementation of the game on the Spectrum is as close to the original as is physically possible on that computer, at least as far as gameplay is concerned. This is the mistake that Dandy made, the graphics had a lot to say, but the gameplay suffered dramatically as a result. In the official Spectrum Gauntlet the graphics are a bit simplified, but the play is all there as well as the speed.

The only difference that I can see in the game are that, when your energy drops a bit low, you can't shove in extra coins. However, my bank manager thinks this is an excellent idea. Also, there isn't a thief to take your possessions, though to replace this there is more poisoned food than usual. Poisoned food takes energy away from you, rather than building you up.

The graphics all suffer from the crudity of the Spectrum, but this is only apparent with the colour attribute clashing as the actual graphics are quite effective and are animated well. The use of colour is extremely limited and characters tend to be a single colour, over four attribute squares, rather than being larger and using a few different attributes. Four attribute squares is around the right proportion of the Spectrum screen in relation to the original Gauntlet screen. This works well and allows the incredible speed of the original game to be translated (in part) to the conversion. The game is certainly faster than on the Amstrad.

The one main difference that the Spectrum game has over the coin-op or Amstrad version is the aspect of the graphics. In the Amstrad and coin-op games, the view is from directly above the screen. However, in the Spectrum game, the view is slightly angled so, instead of having a bird's-eye view, it is more of a 'perched' eye view. Where you can see the characters from above and slightly to one side.

The main problem that I can see is in the way that the different levels work. In the coin-op game, the first nine levels went in strict sequence and the 503 levels after that appeared at random, with the treasure rooms appearing every 3-9 screens, also at random. The way it works on the Spectrum is to load them off tape. The game first loads the title and credits screens (both very similar to the coin-op ones) and then the character selection screen. From this you go into the main game and go through all the set pattern screens.

After the set pattern, it gets more complex. As far as I can make out from looking at the game and talking to US Gold. The game loads in ten levels at a time. From these ten levels the game actually plays four of them and a treasure room if required, and then loads in another ten. When you get to the end of the tape, you can rewind it to the beginning. From the beginning you go through the tape all over again, but the chances are that the combination of four rooms from ten will be different. Ensuring a completely different chain of levels.

Next year, US Gold hope to release an expansion pack for Gauntlet that will have more dungeons in it. In the same way that Atari released Gauntlet II onto an unsuspecting coin-op public. With the new pack in mind, the people who have bought the game will be asked to design their own dungeons and the best designs will go into the new game.

Half the instruction space is taken up describing how to design levels for Gauntlet, how to enter, and what you win (tee-shirts and copies of the game or disk). This doesn't merely waste space but provides a valuable source of information about the game, consisting mainly of a list of nasties, their generators, and a list of all the other different types of things that you can find underground. Read this, and you won't be surprised by the unexpected.

So, what do I think of it? Compared to the Amstrad game it is slightly inferior, especially when viewed in comparison to the coin-op game itself, which isn't particularly surprising. However, its one advantage is the great speed at which everything happens. This totally kills Dandy or any of the other Gauntlet clones.

Compared to the state-of-the-art in Spectrum games, this has got to be the best thing to hit Spectrums since Torus managed to turn out a decent version of Elite. Let's hope that the team of US Gold producing and Gremlin Graphics programming produce more in the future, because Gauntlet is excellent.

Gauntlet on the Spectrum is excellent. Not quite as good as the Amstrad version, but the great speed at which everything happens kills all other clones dead.