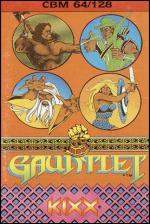 The top-grossing arcade game came to the C64 in late 1986 and attracted good reviews all round. Up to two players each take control of one of four characters, all of whom have varying magical and physical attributes. They are then transported into a series of 512 scrolling dungeons, all jam-packed with a multitude of monsters which wander through the corridors creating aggravation for your intrepid party. Fight them either hand to hand or by shooting them, then collect food and ale to heal your wounds.

Personally, I never really got on with Gauntlet. The action is just a smidge too repetitive and in single player mode the odds are really stacked against you. Still, the conversion is a reasonably accurate one, and anyone who was hooked on the arcade original will doubtless feel the urge to play this again and again.

The action is just a smidge too repetitive and in single player mode the odds are really stacked against you.