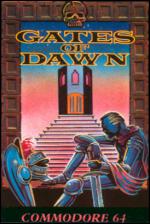 Such were the thoughts which went through my head when playing this game from Virgin. The game is based on the nightmare world of sleep and you dream that you are a knight in armour wandering through an ancient world fraught with dangers.

As you progress from room to room, your progress is mapped out on a chessboard to the right of the graphic action screen and the aim is to reach the 'gates of Dawn' or, in the words of the song, to help me make it through the night.

Weird and wonderful challenges await the dreamer with spiders and bats featuring strongly in the action. Occasionally a room contains an object or two which may be useful later on and these may be carried until required or dropped if you later decide they are useless. As usual in adventures you are limited in the number of objects which may be carried, and in this game that means only five.

The instructions are sufficiently detailed to allow you to commence the game, but no clues are given to the method of play so trial and error is the watchword.

Graphically, the game is sophisticated one moment and blocky the next, and like most 3D screens it is difficult to judge depth and relative positioning. This means that death frequently occurs through miscalculation and a lot of chance is involved in success.

As I played the game I found that total confusion gradually gave way to a vague sense of purpose. I also felt my reaction towards the program change from one of dislike to that of curiosity. Perhaps persistence might lead further to addiction. I must admit that this is the first action adventure which has given me the usual initial feeling of despair which I experience with text-based adventures.

If an object is selected for use, the computer may ask how it is to be used. For example, having collected a mushroom I gave the command 'eat' and for several screens every object took on the appearance of a mushroom, and all of the listed objects which I was carrying changed to read mushroom. I've yet to find if the mushroom has a real function other than as hallucinogenic relief. Weird.

As I played the game, I found that total confusion gradually gave way to a vague sense of purpose.