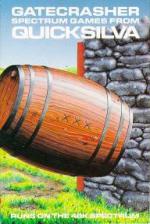 'Has your keyboard melted away under the heavy artillery?' says the inlay on this new brain teaser. 'Do you have nightmares about swooping birdmen? Well, if so, this is the game for you. It has none of these.'

This seems a little censorious of Quicksilva, who are responsible for having swooped with many a birdman in their time, and brought much heavy artillery to bear as well! Gatecrasher is, simply, a brain teaser about gates and barrels. Basically you have to guide a number of barrels through a maze to make them land in one of the nine boxes at the bottom of the maze. In the maze there are gates placed at 45' which change their angle every time a barrel passes them. This makes it essential to study the path through the maze for each barrel respective to where you want it to go - and do this very carefully. The barrel dropper at the top of the screen may be moved left and right along the top to let you drop a barrel into any of nine apertures. Additionally, the pathways of the maze with their gates, may be scrolled vertically to create alternative routes through. You are given 20 barrels per level and there are seven levels.

On completion of level 7 the player is presented with a code to break and a chance of winning £200. During the game you may cause an earthquake which costs you one barrel per quake, but it rattles the gates and alters their present angles at random, which may be a help. Odd numbered levels tend to present easier mazes and even number levels are harder. There is no time limit.

Control keys: user-definable, two needed for left/right and two for scrolling maze up or down, one to fire the barrel on its way
Joystick: Kempston, although most other via UDK
Keyboard play: hardly essential, but responsive
Use of colour: average, although use well
Graphics: simple, effective and with very smooth movement
Sound: simple tune, useful noises, otherwise not much to be heard above the whirring of the brain
Skill levels: 1
Lives: 20 barrels
Originality: very original and unique to the computer
Features: a competition which closes December 3,1984

'Gatecrasher is a strategy game, and the idea and layout is fairly simple, but it's very effective. I found the game to be both absorbing and challenging. The graphics are good, though simple like the game. I've a feeling this could become a sort of cult game - remember the Rubic Cube?'

'This is really a thinking game - no fast reactions or luck are needed here! l think a game like this might appeal to an adult market, where forward planning is a must. All the graphics move very welt Perhaps it should be played with two people as it can become boring playing alone.'

'Gatecrasher is a triumph of simple ideas over complexity. It is a classic puzzle game, and uniquely something for the computer, unlike so many attempts to translate traditional 'solitaire' games to the small screen. It is an example of that old favourite question about how many grains of rice would you end up with if you started with one grain on square one of a chessboard, two on the second, four on the third and so on. The resulting figure is staggering of course, almost unbelievable. Gatecrasher has those sorts of combinations possible in what looks relatively simple at first. The game has excellent on-screen instructions and requires no playing skill - just brains and a good eye! I thought it was fascinating and extremely playable.'!

The game has excellent on-screen instructions and requires no playing skill - just brains and a good eye! Fascinating and extremely playable.