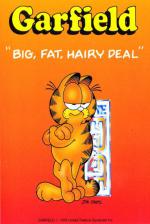 Hah! I think I know why they gave me this game to review. It might have something to do with the fact that the hero is a fat lazy slob, with a liking for coffee, snoozing and large amounts of nosh. First person to draw comparisons with me is looking for a typewriter in the gob! Anyway, where was I? Oh yes, the game.

There's usually two ways a game based on a well-known and well-loved cartoon strip can go; either brilliant or complete trash. You run the risk of not doing the character justice, annoying fans of the strip, and more often than not doing a sub-standard rush job into the bargain. So where does Garfield fit in?

You have to collect items from around your house in order to escape to rescue your true love, Arlene, from the City Pound. In order to keep going in the game, you've got to drink coffee to stay awake and eat to stop yourself getting tired. But as well as this ceaseless drive for nourishment, you have to solve the problems in the game too, like how to stop yourself running out of coffee and food, and how to get to the Pound without nodding off on the way or just getting lost. There are some interesting little twists to the game, like where you find one of the first pieces of food (I defy anyone to find the hidden healthfood store on their first go!) and how to distract the butcher long enough to snatch and eat the sausages, and this all adds to the fun.

There's little or no sound in the game, no music anyway, just the sound of Garfield's paddy paws [Cats don't make a noise when they walk, do they? - Ed] on the carpet. I'd have thought it would be better to have a noise in there for when he kicks Odie (the stupid dog) out of the frame, rather than just a constant tick, tick, tick as he walks around. Still, it's not too annoying, and I suppose most of the memory in the computer is being used for the graphics, which in this game are far more important.

I'll have to be honest; I didn't really like this game when I first played it, and I fully intended to slate it completely. But after playing through it and solving two or three puzzles, it started to grow on me quite unexpectedly. I must say I was very impressed by the quality of the graphics; the guy who drew and animated them must be a real Garfield fan, 'cos he's captured the essence of the madcap cat, and squeezed it all into a 48K game. All his famous facial expressions are there, changing along with his moods, and in time with the game action. The gameplay, I thought, was just a tiny bit bland, but I suppose like the music it came second to the fact that the game had to look right, first and foremost.

A good licence deal, mounds of dosh for The Edge, and a playable and fun arcade adventure for us lot. Everybody wins, really.

A good licence deal, mounds of dosh for The Edge, and a playable and fun arcade adventure for us lot. Everybody wins, really.