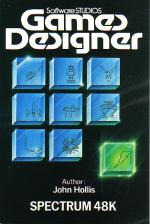 Most young 48K Spectrum owners dream of being able to write a prize-winning machine-code arcade game. The dream can be a reality with Games Designer for the 48K Spectrum from Quicksilva Software Studios.

The package will enable you to build various game elements into the game of your choice. You can design large animated characters, called sprites, and make them into spaceships, witches, demons, or even mutant hamburgers.

Once you have designed the characters you can decide their movements with the attack wave designer. With the aid of this tool you can make the game as difficult or as easy as necessary. Explosions, zaps and even spaceship engines can be manufactured using the sound generator. It can be programmed to take effect when an alien or laser base is hit.

To manipulate games you need no programming experience. The disadvantage is that the games you create will not run independently of the Designer program. You have to load the main program and select the game load option to play back the program you have created.

Although you can create a variety of games, with aliens appearing from the sides, top and bottom of the screen, the types of game will seem finally to be all the same. In effect all you are doing is zapping aliens and there is no change to the format.

To become used to the package you might like to try one of the eight games included on the new game menu.

They include Attack of the Mutant Hamburgers, Hallowe'en and Reflectatron. Most of them will provide a certain amount of fun but many of them just emphasise the point that they are the same games but with different aliens, moving in different attack waves.

If you want to program games with no programming knowledge, Games Designer is for you.

It can be obtained from Quicksilva Ltd, Palmerston Park House, 13 Palmerston Road, Southampton, Hampshire SO1 1LL. It costs £14.95.

If you want to program games with no programming knowledge, Games Designer is for you.