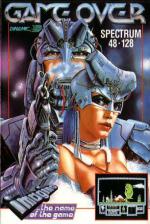 When a megalomaniac tyrant queen threatens the galaxy there's only one person who can help... Rachael Smith.

What? Game over! You cannot be serious. Okay, some games are so tough you never make it past the first level, but when even the loading screen carries that fateful message... Well, they reckoned without the might of Rachael, who has right on her side.

Actually, some of you may prefer not to get past the loading screen as it features the same Amazonian tottie in the skintight bikini who's had you slobbering all over the advertisements recently.

But don't get too enamoured with Queen Gremla, because she's the sort of gal who doesn't just give a guy a hard time... she's got it in for whole galaxies. So quit drooling and get your hands onto your joystick - it's time to save the world.

To be honest, the plot's unlikely to win any awards for originality. It's Green Beret in another galaxy as you run along, leaping levels and shooting anything and everything that approaches. But when it comes to play balance, Game Over wins hands down.

That's not to say that it's easy. The aliens, pretty as they are, come thick and fast, and whenever you think you've mastered them there's something nasty lurking on the next screen, such as a great green giant who bounces around like a manic spacehopper!

As well as the flying meanies there are floating platforms to help you cross chasms, unless you want to kiss the canyon floor. And there are red drums for when you feel like a bang but are running low on ammo. Beware though - those arsenals may contain other, less useful supplies!

Finally, when you've run the gauntlet of the 20 screens which make up Hypsis, taking you from the depths of the dungeons to a waiting spaceship, you have to load more data and set off on a further chase and shoot session in the forests and palace of Sckunn.

Gremla has done all she can to make life difficult for you - not to say short. She's even carpeted her palace with a mine field. Luckily your hero, Arkos, is a sprightly little sprite.

Perfect in every tiny detail, as far I can tell, (the Spectrum's resolution wouldn't let me get really intimate) he can run, jump and crouch, and the animation has to be seen to be believed.

He's provided with a choice of weapons, and you'll need to suss out the best way to use them against the enemy if you're even going to reach the half-way point. In part one Arkos has a rifle with unlimited firepower, plus a supply of grenades which come in useful for dealing with mobs or some of the bigger monsters.

Part two sees him supplied with a giant laser which wastes everything that gets in its way but only has twenty-five shots. Again its useful to hold it in reserve for special circumstances, such as the final mega-challenge which involves the almost invulnerable Laser-Shooter.

After all that you may feel you deserve a rest. Tough! Because if I kill Gremla first I know what I'm going to do. I'm stepping into her shoes even before the 'Tyrant wanted' card appears in the Job Centre!

The aliens, pretty as they are, come thick and fast, and whenever you think you've mastered them there's something nasty lurking on the next screen.