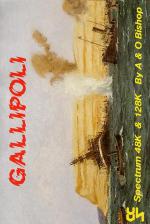 Gallipoli is the latest in a long line of wargames to be released by CCS.

During the First World War, Turkey was allied with Germany and Austro-Hungary. The British made an amphibious landing in the Dardanelles in an attempt to force the passage to the Black Sea and so link up with the Russians.

The campaign, which has gone down in history as Gallipoli. was an unmitigated disaster. The British and ANZAC - Australia New Zealand Army Corps - forces became bogged down in a static trench warfare which was as bad as that on the Western Front, in Flanders.

On to the game. There are options for one, two or three players. If only one plays, he or she commands the British and ANZAC forces, and the computer plays the Turks. With two players, then you split up the allied forces into two commands and play against the computer-controlled Turks. In the three-player version, people play all three commanders.

Once you've made your choice, the map comes up.

Here's the big disappointment: it's not one of the best maps I've ever seen. In fact, it's positively garish. Beaches are yellow, open ground is green, low hills are an odd pattern, hills - the pattern shimmers all the time, and is very difficult to look at. I tried adjusting my set, but to no avail.

Although not drawn on the screen, the map is divided into rectangles. To move, you position the cursor above the unit you wish to give orders to, press Fire, move the cursor to where you want the unit to go, and press Fire again. You have to do this every turn for every unit.

You don't have to order a unit to move. You can tell it to dig in, or interrogate it to find out how many men it has. what its morale is, whether it's entrenched or not and so on. This information is flashed up beneath the map window.

Once the movement phase is ended, the Turks move. You don't actually see them doing so - you just get a text screen saying so.

Next you get to attack. The map returns, and you can order any of your units which are adjacent to enemy units to attack. Unfortunately, it's difficult to tell when units are adjacent - it turns out that they can be adjacent even though a unit-wide space separates them.

Units are 2,000 strong at the start of the game. As they are involved in combat, they take losses off that strength. Typical losses inflicted seemed to vary between 40 and 110 depending on the strength of the attacked and terrain considerations, but it still looks like a long drawn-out slog.

The problem with the game lies in the conception. The actual campaign was bloody and hard fought.

Reduced to a computer game, it becomes boring. All you are doing is repeating the same actions for 23 turns for thirty or so units.

Worthy but dull, just like the campaign it's an attempt at a quick kill which gets bogged down.

Worthy but dull, just like the campaign it's an attempt at a quick kill which gets bogged down.