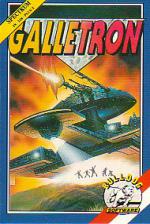 Here we go again! Another arcade adventure from Bulldog, and yet another race of warmongering aliens (are there any other kind?) This lot, a race called the Aarls, have been more than a little naughty and have gone and invaded parts they shouldn't have. They've packed their spaceships, erected defences and generally invaded the areas of No Man's Land, just beyond the peaceful planet of Galletron. Of course the brave Galletronians are not going to take this intrusion lying down, so they send for a brave volunteer to go out there and give the Aarls a taste of hot laser fire.

Your mission, as the unfortunate 'volunteer', is to infiltrate a series of planets overrun by the aliens and destroy a vital communications dish on each one. Pitted against droids - and there are more of these on every planet, so things tend to hot up after a while. Reach the final planet and you're confronted by the aliens' central control dish. If you destroy this your mission is complete, and it's cream cakes all round. Your Tiegyr Mk III Surface Skimmer needs regular repairs and fuel boosts, but luckily supplies can be found on the planet surface.

Galletron reminds me a little of Colony in set-up and style, but it has none of that game's neatness. The main playing screen depicts a view of the planet surface in forced 3D perspective, all in monotones to avoid colour clash, but the play area still looks messy. In fact the gameplay's in quite a mess as well. All too often the skimmer gets caught up in a tangle of graphics with no way to escape without quitting. There's also a massive bug which shows itself early on. To destroy every sentry on a level just stand still and blast away at the same alien until the sentry total reaches zero. This leaves the rest of the area safe to explore.

The game's also far too easy to complete. I finished it off on my third go - not a lot of long term addictiveness there! Together with a terrible collison detector, a lack of depth and some very jerky animation, I'd say this must be Bulldog's weakest release so far. Come on, lads, you can do better than this.

Far-from-addictive arcade adventure that's not up to the Bulldog label's usual standards.

Far-from-addictive arcade adventure that's not up to the Bulldog label's usual standards.