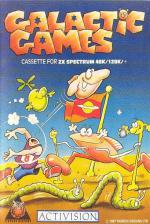 Each event is preceded by a piece of text, presented by Harry, your friendly flying eyeball. A nice touch, but after a while the puns begin to irritate.

The 100m slither is ridiculous. Two undulating worms battle it out for the finishing line whilst regulating slime excretion levels and body temperature. Hmmm. It's fast, the animation is very funny, but it's not as easy as it sounds (and it doesn't sound very easy, does it?!)

Coming up hard on slither's heels, it's hockey time folks, with eyeballs for players, black holes for goals and a living, breathing puck who doesn't like being pushed around. The characters are all lovingly animated, especially Mr Puck! The playing area scrolls, and it's easy to lose yourself off the edge of the screen. Very silly, and just as difficult to control as the worms.

Psychic Judo is a bit of a let down. In a flurry of silly ideas the gameplay seems to have been left behind. Two windows show opponent's eye views of the players, and each tries to destroy the other by firing little thingies. (Not quite sure what they are, thingies is as close a description as I can get). The graphics are boring, and it's all so fast that it's too often a case of the "what-was-that-noise-oh-dear-I-seem-to-have-died" syndrome."... The two players, whose over-developed brains are located in their stomachs, belch bolts of psychic energy at each other and defend themselves with mental shields..." I rest my case.

If you're looking for a completely silly idea, what better than Head Throwing? This time we've dispensed with complex technicalities and reverted to that old favourite, the "who can throw their head the farthest" contest. Get a good run-up, angle the head properly and go for it. Frantic ear flapping gives extra height, and the head must be tipped forward for a nasal touchdown. After a throw, the body runs off to put its head back on. The graphics are chunky, but large and, again, well animated. This is the best of the bunch - it involves the most skill, and has got to be the funniest.

Finally, how about a Metamorph Marathon? A flipscreen terrain must be negotiated in a race against the clock. Luckily, being a metamorph, you can mutate into one of four beings to aid your plight; runner, burrower, jumper or flyer. Running and flying requires a bit of wicked joystick waggling, whilst jumping is a more skilled affair. The characters are nice, but sadly, backgrounds are very dull and I soon lost interest.

It's obvious that a lot of time and effort has been put into Galactic Games. It's well programmed, excellently presented and has a lot of well thought out, original ideas. However, as with many comparable games, there's simply not enough action to hold your interest, with short bursts of play interrupted by long delays.

Intends to amuse, and succeeds, but I have serious doubts about its long term interest.

Intends to amuse, and succeeds, but I have serious doubts about its long term interest.