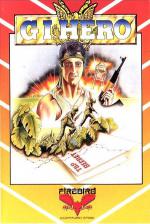 Sensitive NATO documents have been stolen and taken into a 'politically sensitive' country. In response a trained assassin, and Killer: The Wonder Dog (!), are bundled into a plane to be taken into the foreign territory. Engine problems mean an early parachute drop, though, separating Killer and the elite warrior strangely known as an ordinary GI hero.

If you choose to step into the GI's size 11 yomping boots then your first objective is to find the dumb mutt (and be careful some Israelis haven't strapped it with explosives). The forest is crawling with troops who you must dispose of. Initially you've just four clips of ammunition, but ammo is littered all over the jungle. To reload the gun you must usea menu system, which allows you to use items (like wire cutters) and turn objects on/off (like the torch for dark caves).

Once found, your poochy pal gives you some vital assistance in defending yourself. But with or without Killer you only have 24 hours to find the papers and prevent an international scandal.

Trudge, trudge, trudge is all you seem to do in GI Hero, and although the monotony is occasionally broken by shooting troops I soon found my attention beginning to wander. The scenery is almost as dreary as the gameplay, just jungle and caves before you get to the base camp. Ambushes with three or more soldiers often proved fatal, even with Killer, who often went walkies on his own. And after playing this for a while, I too soon felt like going for a walk.

'Killer is a brave mutt, running at enemy soldiers and biting their jugulars. Like him, the hero and soldiers and guards are well animated, considering their size, and a large black 'shadow' around them avoids attribute clash. Sound is less impressive, merely consisting of gun shots and quiet footsteps, but even more disappointing is gameplay. Too much time is spent plodding aimlessly around the jungle, shooting the odd enemy. Although GI Hero has original qualities, such as the easy-to-use menu system, it is ultimately very yawn inducing.'

Although G.I. Hero has original qualities, it is ultimately very yawn-inducing.