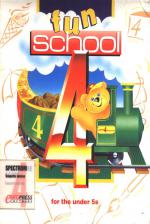 Fun School 4: For The Under-5s

With a general election clogging the T.V. channels at the moment, education is likely to be high on the agenda. And quite right too, but teaching can seem to be a little too clinical these days what with financing and budgets etc. Thus it's good to see a little bit of gun injected into the learning process because, as we all know, it's much easier to learn if you're having fun.

The fun school series first began back in the mid eighties with Fun School 1, published by Computer Press. With Fun School 2, released in 1989 and Fun School 3 in 1990 selling impressively there was obviously a market for this sort of product, so now the much awaited Fun School 4 has been launched. It consists of three packs, each dedicated to a particular age group, each following current national curriculum guidelines and each retailing at the same price point. Parents take note, you might learn as much from these 'games' as your child.

All of these educational packages are well presented and have good graphics which helps greatly, guiding you colourfully through the different learning stages. Bleeps and squeaks are merrily animated indicating whether you've got things right or wrong but sound isn't really over impressive. In general though Fun School 4 is an interesting educational aid.

This package gives a run down of the very basics of learning ie. What you need to get started. Addition is first up and so we join Teddy in the nursery helping him decide how many objects Teacher Ted is showing on the board. If you can work everything out you're then allowed into the playground, hurrah!

Level two is similar to level one, but now you have to actually add the numbers together (oh crikey!) Each number is represented by an object, such as a car, so this level gets the kiddies familiar with every day things too.

On level three you're no longer aided by objects, just numbers - though if it gets too had you can borrow some bricks from teacher to help out. After all that hard work you now have the opportunity to get messy in the painting room. Basically this involves going mad and spraying the screen with imaginative splats and creating mini masterpieces. Then, after you've stood back and admired your artwork, it's time to go on the fun train! There are many more recognition games and puzzles over the next few levels, you even get to do some computer karaoke and help Teddy sort out Daddy Ted's books by examining his book shelf and the secret book hiding place under Ted's bed (nightmare city!) - a lot of guesswork is involved here.

This is a fine software package with plenty of activity. It might seem too much like work to retain the interest of some under five year olds for very long but overall it provides a good introduction, not just to colours, numbers and recognition but also to computers.

Fun School 4: For The Under-5s

It might seem too much like work to retain the interest of some under five year olds for very long but this provides a good introduction, not just to colours, numbers and recognition but also to computers.
Logout