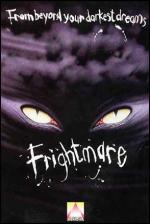 In the deepest reaches of the subconscious lurk primeval memories of creatures long since vanquished from the light of day. They only emerge into the terrible dreamscape of the mind - the place where the player of Frightmare now finds himself trapped...

The main objective is to survive long enough to wake up, achieved by advancing the alarm clock to 8:12am. The game starts at midnight an each new flick-scren visited accelerates the time by six minutes. The secondary objective is to increase the dream to its highest possible state. This is achieved by shooting monsters, picking up chalices or by successfully using objects in the inventory.

There are many monsters inhabiting the subconscious, including disembodied hands, werewolves, and even Satan himself. Contact with these is fatal, but five types of weapon are available for defence: holy water and bullets kill only specific types, watches slow creatures down and crucifixes freeze them, and one silver revolver is obtainable to destroy the most powerful of all the denizens.

Other objects are collected to assist progress, including wings to increase the size of jumps, rings to bestow additional lives, and transporters which convey the player to another screen.

As the inner self is penetrated, the dream state, recorded in letters at the top of the screen, alters accordingly. Beginning with a 'bad dream' it slowly advances to finally become a 'nefarious frightmare'; after that, the dreamer awakes.

The concept behind Frightmare is very limited: jump from screen to screen collecting objects and avoiding nasties. Graphically it's inconsistent: imaginatively designed and animated sprites are set against detailed backdrops - the piles of skulls are particularly striking - which achieve the ghoulish atmosphere they're designed to generate.

Unfortunately, the funereal colour scheme sometimes descends into gaudiness. The sound is agreeably melancholic, with a morbid title track and some unusual in-game effects. Ultimately, the overall inspiration is marred by the gameplay: because the action is swift and freedom of movement limited, the gameplay is too frustrating to deserve a lasting accolade.

After some interesting hype, Cascade's latest game comes as a bit of a disappointment. Rather than being scary, Frightmare is simply a mediocre platform game with morbid overtones.

Admittedly a chilling atmosphere is difficult to convey, but apart from some macabre sprites and backdrops, Frightmare provides little ambience. I think the most annoying aspect is the ease of death: instea of having gradually depleting energy, one hit signals the loss of a life.

There's no room for experimentation and on later screens, the frequency of death proves very frustrating. The appeal of seeing later screens isn't strong enough to warrant extended play, and the current price tag defies recommendation.

It's been a while since a good platform game was released on the Commodore... Could Frightmare be the game to change the trend? Well, it boasts nicely detailed (though plainly coloured) graphics - both sprites and backdrops have obviously had long hours spent on their design - and there is a suitably haunting title tune. What follows, though, is a very standard, very uninspiring leapabout.

Control of the player's character feels imprecise, which leads to frequent and frustrating death. The scoring system shows some innovation but the lack of variety between screens restrains feelings of progress, and there's an almost supernatural sensation of having seen it all before, and in a better form. As I said, it's been a while since a good platform game was released on the Commodore...

Graphics 71%
Highly detailed backdrops and beautifully drawn sprites marked by a gaudy use of colour.

Hookability 42%
The urge to advance to the next screen is the only pull.

Lastability 22%
The gameplay's simplicity and the strong frustration element grow tiresome all too quickly.