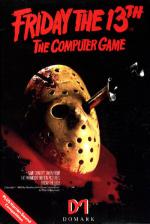 Domark follow on in their classic 'Game Of The Film' series with new release Friday the 13th, a story of naughty Jason, a man with a view to a kill. The program is not all you get upon purchasing the game, included within the terrifyingly packaged box are two really frightening blood capsules to scare and amaze your friends. Also included is a special effects competition where you have to match up the ghoulish noises with the captions listed on the cassette inlay. The prize is one of five colour monitors for the C64.

The game itself revolves around well-known mass murderer Jason. Jason is vacationing at the Crystal Lake holiday camp. The only trouble is that other people are also staying there and, running true to type, Jason decides to kill them one by one. This is where you come in - having been cast as one of the "plot's" ten characters by the computer, you must play the hero and save as many campers as possible. Silly proles that they are, the other inhabitants are more interested in having a good holiday than avoiding the ice hockey-masked Jason.

Thing is that Jason is disguised as one of the other guests and only comes out of his shell when he's trying to kill someone.

The best way of protecting everyone is to set up a sanctuary, safe from Jason's clutches. First the sanctuary cross needs finding - but it is hidden at a random location in the holiday camp.

The cross needs to be picked up and carted to a large (but contained) room like the barn. Drop the cross here and you've created a safe room with everyone in that location immune to Jason's gory advances. All the other campers need to be warned and directed to the sanctuary room for their own safety, but they like being on holiday so much that after a few minutes waiting around they're likely to wander off for a sunbathe and risk getting dismembered.

Looking quite similar to Creative Sparks' Mad Doctor, the screen is represented from a side-on pseudo three-dimensional view. The character in your control is moved with the joystick in all eight directions. The fire button allows an object to be picked up and placed in the one object store on the status screen.

If not moving, fire also drops objects but when on the run fire uses the object in your grasp. Most of the items around the camp are from Jason's weapon collection that he carelessly leaves lying around the place.

Like all good villains, Jason dresses in black when not disguised as a camper and attacks his victims with a big white stick. If you stumble across Jason then repeated bashings with the weapon in your possession should kill him. With Jason dead, the next level is entered with a replacement Jason and you playing a different holidaymaker at Crystal Lake. If boredom sets in because you don't enjoy being the hero, it's possible to rush about massacring the camp residents instead, although when you're the last one left, Jason's attention shifts in your direction...

Underneath the main screen is a status section, displaying various bits of choice information. The eight campers are shown on the status screen; those done in by Jason are replaced with a little tombstone engraved RIP. A face of 'yourself' is shown on the left hand side and as more of the campers get smeared, the more your hair sticks up as things get frightening.

Next to the portrait, an energy bar shows what life is left in you and score is shown next to that. If the energy band hits zero, then a ghastly synthesised scream leaks from the speaker as the game ends.

If a sanctuary room is set up then the other persons in peril can be sent there. If, by mistake, Jason gets sent off to the sanctuary room all the people there run off terrified.

Throughout the game various effects are employed to try and scare you. Sometimes when a holiday camper gets the chop, a gory picture flips up to a synthetic scream. Lots of spooky music is put in to add to the atmosphere.

Instructions on playing the game are clear and, to quote the inlay:

"Before playing the game make sure you:

How Domark expect a person of any intelligence to read the banal drivel on the cassette inlay and take it seriously, I just don't know!

The graphics are of very low quality with pathetically animated sprites, 3D which just doesn't work and a badly drawn (and tiny) landscape.

The music's really terrible too, consisting of really basic tunes sung with even more basic, ear-grating voices. The only redeeming feature about the sound is the realistic scream which the Commodore utters at regular intervals throughout the game.

The most frightening aspect of the game is that some punters will have bought it by the time this review is published and not had a chance to read about how bad it really is.

Wow! I've never been so frightened in my life. It's like a ghost from computing past coming back to haunt me with chunky graphics, grating music and retarded gameplay.

After all the hoo-haa about "will the game damage our poor children's fragile identities?!" it's just a Mad Doctor clone. The only possibly upsetting thing is the post-purchase shock of realising what you've spent your money on. The instruction sheet is really patronising and about as useful as the two blood capsules included.

As is so often true about such film conversions, Friday The 13th is a waste of time. Have a Happy New Year, avoid this product - and avoid Holiday Camps by lakes.

Friday The 13th - the computer game is far more horrific than the film, but for different reasons... The graphics and sound are both atrocious and suit the game well, what little there is of it. I haven't played anything as bad as this for a long time, and quite frankly I'm not prepared to waste any further words on it.

However, as an addition to the inlay blurb, I suggest you turn off the television as well as the lights when playing.

Sound 28%
Incongruous music, thin screams and the odd hacking 'bop' as another victim hits the ground.

Lastability 16%
Really, there isn't much.

Fatty sprites wobbling unconvincingly around on a cardboard cutout background... Turn off the television as well as the lights when playing.