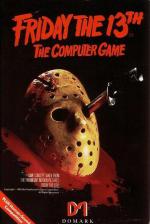 If you've seen the film(s) then you'll already know the background to this game. For the benefit of those who missed them, here's a quick summary: people staying at a quiet holiday camp at Crystal Lake find their peace shattered when a young boy, Jason, accidentally drowns. His mother is so distraught at his death that she blames the other campers who did nothing to save him. One by one they are all murdered by Jason's Mum, until only one girl remains alive. She manages to kill Jason's psychopathic mother. All alone in the middle of the lake, the lone survivor waits while slowly the ghost of Jason rises from beneath its murky depths to take his revenge.

The game picks up where the film leaves off. You are now a camper at the ill-fated holiday camp and Jason, predictably enough, is still wreaking havoc. It is up to you to find a sanctuary which Jason won't enter and then persuade the other nine campers to join you there before Jason sends them on permanent holiday.

At the start of the game the computer selects one of the ten campers at Crystal Lake, and you take on his or her personality. The holidaymakers all have individual personalities and react differently during the game according to their particular strengths and weaknesses. Jason is a cowardly soul and always attacks the person whose panic level is the highest. Although it is up to you to save your friends from a grizzly death, you are by no means immune from the growing frenzy of your fellow sun worshippers.

The status of your character during the game is displayed at the foot of the screen. Three windows are used to indicate the levels of panic, strength and sanity you possess. Gradually, as panic levels rise, the hair on the head of a little portrait in the status area begins to stand on end. An ice hockey mask as worn by Jason fills in on another window to indicate the mental state of the character you are playing, the more mask the madder you are! Strength is displayed via a barbell which rises and falls, mirroring the physical status of the hero or heroine of the tale as it unfolds. Ten little icons on the right of the status area represent the campers at Crystal Lake, and as Jason eliminates them their figurines are replaced with tombstones.

Jason scampers around the playing area selecting weapons from his arsenal and eliminating campers one by one, starting with the most panic stricken holidaymaker. The ultimate aim of the game is to save all the campers from an untimely end by killing Jason before he kills them. Although he's a homicidal maniac, Jason is frightened of a cross which can be found on the campsite collect this and deposit it in a room and Jason can't harm anyone who stays with the cross.

Once a sanctuary has been set up by depositing the cross in the barn, church or house, you must persuade your playmates to take refuge. Walking up to a camper, it's possible to shepherd him or her to the Sanctuary you have established. These people are on holiday, however, and despite the fact that there's a murderous loony at the resort they're determined to have fun! It is quite hard to get them to stay indoors, and they regularly wander off to go sunbathing or even swimming in Crystal Lake.

Jason looks just like a regular holidaymaker he can only be spotted when he's killing someone on screen. As it is impossible to distinguish Jason from the other characters, you may try to lead him to the Sanctuary, in which case he scares the campers off, and you have to move the cross to another location, set up a new sanctuary and start herding the campers to safety once more.

To even the odds a little in the game, Jason is careless with his weapons, leaving them lying around. There are ten in all and you can pick up and use a weapon you come across. Only one death dealing implement can be carried at a time, though there's no point in getting greedy. If you succeed in saving all the campers and kill Jason too, then he takes on the personality of your character and the game moves to the next level of difficulty where you assume the persona of another camper.

Control keys: Q up, A down, O left, P right, M fire
Joystick: Kempston
Keyboard play: adequate
Use of colour: not subtle
Graphics: rather crude, a bit grotty
Sound: the screaming the start is the best bit
Skill levels: 5

There was a lot of hype over this game, in fact the Newsfield office is still knee deep in headless rubber bats and plastic knives from Domark's visit a few months ago. After playing the game for a bit I feel that most of the hype was unjustified. Graphically, Friday the 13th hasn't very much to offer; the characters are blocky, undetailed and jerky as is the playing area. I also had a few problems accessing different screens so after a short time I had just about given up with this one, although I did go on to nearly complete the first level. The only thing that really appealed to me about this game is that you can murder your innocent friends and get millions of points by replacing the cross in the same room. I wouldn't recommend Friday the 13th though 'cos compelling it ain't.

The film is great, with Jason running around chopping people's heads off, but disappointment hits me once again. If Domark had tried, Friday 13th could have been a good game with such a scary storyline. On the inlay it says 'lock all doors'-but why? No spectacular graphics, and a few colours on buildings and more would be better. Sound is scarce as not much came to my attention throughout the game and qualities like this aren't going to keep your eyes on the screen or fingers on the keyboard for long. All I can suggest is close all windows and doors, hire a video and watch that instead.

For a while it seemed that Domark's standards were actually improving - Gladiator really wasn't that bad. Friday the 13th, however, sees the return of that old Domark bad taste and ineptness of production. I'm sorry, but it's just absolutely awful. What's really bad is that as with most naffo releases, the program's main selling period will be over by now and any punter who was going to be had by the excessive hype already has been. For anyone considering buying this release, the fairest thing to say is have a look at it first as anyone who then thinks it's quite decent deserves the horrors that the game is replete with.

The fairest thing to say about this is: Have a look at it first. Anyone who then thinks it's quite decent deserves the horrors that the game is replete with.