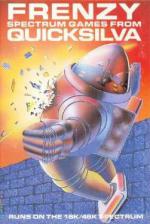 Adaptations of arcade favourites are still a major part of the micro games industry, and with Frenzy, Quicksilva have produced a game that fans of the genre will recognise and enjoy.

There's an infinite number of maze-like rooms for you to guide your little man around, five levels of cunningly villainous robots, a minelayer, exploding pods - and, of course, the ultimate and unstoppable 'Evil Orville'.

On loading, Frenzy goes into its attract mode which consists of details of play keys, a score breakdown and a sample screen of yellow, first level robots. Controls are straightforward enough, although I would have preferred bottom row keys in place of the selected cursor ones. Later copies of the game will have a built-in Kempston joystick option, but if your game does not have this, don't despair - Frenzy is included in Kempston's "Conversion Tape 2".

Depending on how nimble-fingered or otherwise you are, it might take you some time to get the feel of the movement keys. For the first few plays, I found it annoyingly easy to confuse 'up' with 'down' - in spite of the QS key overlay which is included here - thereby dooming myself to premature electrification and losing one of my precious three lives. A joystick should make a big difference to the game's playability.

This brings me to my major complaint against Frenzy. The game has a high score table which allows you to put a name to five high scores. However, there is no preset low limit and so Frenzy thinks anything you score after loading is a "GREAT SCORE!" and announces it accordingly. It's more than a little frustrating to have to sit through the routine, colourful and tuneful as it is, even when you've only managed to score 40 points or so in the early stages of getting to grips with the game. As the table works for the five highest scores in any game session, you are going to have to put up with this for at least your first five games, and very probably, considerably more often.

Is a score table such a good idea anyway? I would hazard a guess that most people play computer games on their own, and so have no real need to enter their initials as they almost certainly already know them. A 'Hall of Fame', allowing you to make a copy on a printer, might have been a more interesting alternative, giving you the opportunity to brag about your superior skills to your wife/girlfriend/boyfriend/mother/father/friends or anyone else you could persuade to listen. In any event, the Frenzy score table should have had an inbuilt low limit of, say, 800-1000. Then, having a "GREAT SCORE!" would really have given you a glow of pride instead of, as a present, giving a red glow of seething frustration.

The game itself is all about getting the robots before they get you. They certainly look menacing enough with their eye-scanners sweeping left and right watching your every move. The robots are intelligence itself, particularly at the higher levels. Reacting to your movements, they have no intention of being 'sitting ducks'.

You are allowed to fire only in the direction that you first moved, so skillful play is needed to wipe out even all the first level robots. Higher levels contain higher scores (but more devious and deadly) robots, mines and exploding pods. Beware of 'Evil Orville'. He materialises from the screen centre and proceeds to head straight for you, and your blaster doesn't worry Orville one bit. Escape is possible through one of the exits, but there is also the temptation to hang around and try to finish off those last couple of robots...

Frenzy, at £4.95 is an enjoyable game experience and has some smashing sound effects which add greatly to its appeal. It's a game that rewards repeated play, giving you a real chance of building up your ability. The screen layout, even after several hours play, never seems to repeat itself and so you have an infinite number of rooms to explore.

Pity about that score table though...

A game that rewards repeated play, giving you a real chance of building up your ability.