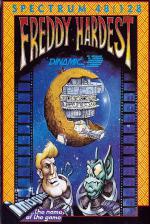 Dinamic doesn't make it easy on itself. It makes games that are hard - too hard for most reviewers in fact and often large sections of its games are never discussed.

Let's hope that's not a happens with Freddy Hardest its latest and possibly greatest game. The point is that Part 1 (around 48K's worth!) is a) fairly impressive b) pretty difficult but Part 2 (another 48K) is a) absolutely brilliant and b) pretty difficult.

Describing graphics as 'cartoon-like' has become somewhat meaningless, so let's say that the Freddy Hardest sprite is superbly animated, large, and very detailed. The guy seems to have a real character - he thinks he's cool (check out the haircut) but obviously he's a dork (note the legs).

In Part 1 he just has to try to get across the planet surface by leaping over volcanoes and zapping or kicking his a past some of the most brilliantly designed aliens seen in a Spectrum arcade game. From time to time he comes across enormous gaps that require some pretty exact leaping to successfully get across - luckily the amount of precise control you have over the leap (it according to long you hold the Fire button ) is enormous. Practise makes perfect so if you get it it's you and not your joystick...

As Freddy leaps and kicks his way a the aliens get and more nasty. The first are a bunch of dull-looking potato creatures - fry them with your laser when the chips are down. (Sorry about that - a Carry On film was last night). Later you get the bouncing ants, a far - and deadly - adversary. They tend to bounce straight into your path as you leap over a passing volcano - you'll need to combine all your blasting and kicking skills to get past them.

Part 2 is a little like several other games but most of all it reminds of Impossible Mission. The general plot is part of the reason but it's the speed and excitement combined with absolutely graphics that is the real key. Set below the planet surface are a multitude of different levels reached via transporter pads. Freddy's task here is to interrogate a series of to find the whereabouts of various fuel pods and other equipment which will allow him to escape.

There is a partial attempt at 3D in this section - the backdrop is flat with key equipment like computer terminals and lifts drawn with a very effective illusion of perspective. The actual walkways are drawn in the same way and the end result looks marvellous.

In this section a whole new selection of aliens plague Freddy's life including what for a long time I believed was a raincoat, (technical problems with the mighty SU TV). This section is mostly two-colour, so no attribute problems but Dinamic has cleverly used spot areas of colour so that the overall effect is not of drabness - it looks great.

Criticisms? No serious ones but I think Dinamic lets itself down in the structure of its game. Part 1 goes on for too long and is essentially very simple though fantastic to look at. Part 2 is of similar length but seems more involved and inventive.

Nevertheless there is lots to recommend this one - it has some of the best graphics design seen since the Knight Lore period of Ultimate and is very exciting to play.

Will you be one of that elite band who persevere and survive long enough in Part 1 to gain access to the brilliant stuff in Part 2?