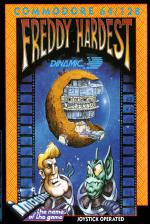 Galactic playboy, Freddy Hardest, has been on another binge! Tanked up with Dutch courage, he wants to take on the world - but space pilots shouldn't drink and fly. In an inebriate blur, Freddy crash-lands his ship on the planet Ternat, site of the aggressive Kaldar headquarters. With his ship destroyed he's there to stay until alternative transport can be 'borrowed'...

The mission is split into two sections. In the first, Freddy makes his way to the Kaldar base across a horizontally scrolling landscape. Every step of the way is fraught with danger, and deadly creatures are dodged or blasted, and chasms jumped over. Freddy has five lives, and one is lost every time he falls foul of a hazard.

When the first section is completed, Freddy gains access to the next, which is loaded separately from tape. Here, our playboy hero attempts to steal one of our colour-coded spaceships from a multi-level underground complex. To activate a ship, Freddy finds the correct Captain's log, nuclear energy cells and hyperdrive instructions.

While making good his escape, Freddy also battles his way past the base's deadly inhabitants and a selection of their robotic guards - life is tough when you're a galactic playboy.

Like its forerunners, Freddy Hardest is difficult and frustrating - but, unlike its predecessors, it is also dull and unrewarding. The first section comprises a laborious trek across a dull landscape.

Control is tricky, and jumping over chasms requires pixel-perfect precision and a lot of luck. The second part is a poor man's V, with Freddy running around a boring and unexciting space station in search of items to help him escape.

The action soon becomes tedious, and after a couple of sessions there's little urge to reload.

Freddy Hardest offers nothing new or thrilling, and is very overpriced.

Knowing how difficult Imagine/Dinamic games are (Game Over and Army Moves), I gave Freddy Hardest a chance. I played it a lot and tried to keep cool, but all to no avail.

The game is presumably titled as such because of the three Dinamic games, this one is by far the most difficult. After many attempts, I could only get a couple of screens past the starting point.

Basically, the game is poorly designed: leaping across hazards is fine, but when an alien literally appears out of nowhere just where you're going to land, the game takes on new dimensions in frustration.

Jumping onto the moving platforms is also marred by the collision detection which sometimes allows Freddy to fall straight through the centre. Aaargh! Haven't Dinamic heard of playtesting? If you want to retain some semblance of sanity... don't buy this!

Sound 49%
Dire title music, and the soundtrack and spot effects are merely adequate.

Hookability 52%
Very frustrating from the outset, and the urge to battle through the first section isn't strong.

Haven't Dinamic heard of playtesting? If you want to retain some semblance of sanity... don't buy this!