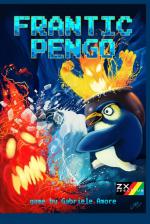 You'll remember Pengo - it's that classic 80's game where you play a penguin in a maze of patrolling monsters and crush them by flinging ice-cubes at them. A very addictive number in the arcades, it spawned hundreds of clones on home computers back in the day and now we've got yet another one. Yawn.

However, this one is a real oddity. I'd say it's more Fiddly than Frantic. Firstly, the playing area is about four times bigger than any other version I've ever seen, and the sprites are only 8x8 characters in size. Secondly, the penguin doesn't react to keypresses all that well, sometimes remaining stationary even though you're tapping to move him in one direction or another. Thirdly, because of the small sprites and the lack of fine control, little Pengo is difficult to position too.

Add to this that there's no sprite scrolling (giving you a sort of Basic-style jerky movement from one character position to another) and enemies with useless AI. The result: Well, surprisingly enough, not a complete disaster but a game that doesn't really hang together the way you would expect it to.

There are some nice additional inclusions - lava monsters who cannot be crushed until you've also crushed all of the cauldrons on the sheet, and a rather rapidly-depleting timer which gives everything a sense of urgency.

Overall, this is fun for a few minutes but, because of the high frustration factor, I soon lost interest in it. The music is really good though.