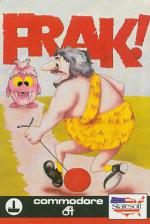 One of my favourite games of last year was Aardvark Software's Frak! for the BBC. The rights to the game have been bought up by the Stevenage-based company, Statesoft, and released on the Commodore 64.

The new game is very similar to the BBC original, the smaller sized screen being the only major difference. This presents a problem in any type of game but is a positive nuisance in a scrolling game like Frak! This is apparently intentional and allows "off-screen action" to take place while you are playing. "Off screen action" basically means that you can destroy obstacles and kill monsters that aren't in the part of the maze which is being displayed on your television.

Apart from my small gripe about the screen layout, the game has been hardly changed at all, although the graphics are larger and slightly better defined than the BBC. One big disappointment with Frak! are the sound effects, or rather the lack of them. The only sounds are those of his footsteps and his yo-yo, the weapon he carries everywhere with him and uses with great effect to knock monsters off narrow ledges.

The aim of the game is to guide Frake, a hulking, bad tempered caveman, though several dangerous levels, killing all the monsters with his yo-yo and collecting as many of the gold chalices he can find.

Once he has reached the secret ledge at the end of each level, the fearsome caveman is transported to the next level.

I managed to complete the first level after tearing most of the hair from my head, but I could never get more than a few footsteps in the second level.

Frak for the Commodore 64 is a well written and produced game. It has quite a few original, and amusing, ideas. However, cute little caveman and furry monsters aren't enough to make a top-selling game - and I have to put Frak! well down my list of favourite Commodore games!

A well written and produced game. However, cute little caveman and furry monsters aren't enough to make a top-selling one.