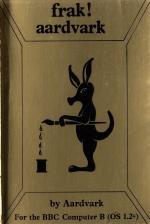 Nick Orlando, the power behind Aardvark, has built up a reputation as about the best games programmer for the BBC. Frak will push that reputation a bit higher still.

You couldn't imagine a bigger contrast with his last big program, Zalaga, which was a futuristic Galaxian-based shoot-'em-up. Frak is prehistoric. And it's a platform game. You have to leap around a network of platforms in search of keys which will take you on to a new level.

But anyone thinking it's just another Manic Miner rip-off should look more carefully. Trogg, the hero whose part you play, is a treat to behold. For a start, he's huge, one of the biggest fully animated computer heroes yet. And he's been drawn in delightful cartoon style, with black outline and smart orange suit. As soon as you get him scurrying up his first ladder, you just know he's an amazing guy.

A few moments later, you discover someone even more amazing: he's armd with a yo-yo. Those who've forgotten their pre-history will need reminding that a yo-yo is what enlightened cavemen used to defend themselves, for unlike boomerangs, a yo-yo always comes back.

You'll simply love using it to dislodge the enormous Scrubblies, Hooters and Poglets which sit motionless on the platforms of Frak, waiting for you to bump into them.

Unfortunately, not all the nasties are motionless. Trogg's world is also populated by daggers which glide in at an angle from above, and balloons which float up from below. What's more, these appear from different positions each time you play, so that unlike Manic Miner, the game can't always be played the same way.

The balloons are not too much of a problem. Since they move in straight lines, Trogg can generally get out of the way. But the daggers can be deadly, floating gently and diagonally and then spearing you just as you thought you were escaping to the next page.

Another difference to Manic Miner is that each platform network is spread across more than one screen width - as you reach the edge of the picture it scrolls to reveal more platforms.

Meanwhile the action is accompanied by one of three catchy tunes and some really frenetic sound effects.

All this advanced programming has meant that there's room for only three different platform networks. (In the first it's platforms and ladders, the second logs and ropes, the third girders and chains.)

However, it'll take you a considerable time to get through all three, and when you do the action is repeated at a harder level. In level 2, as well as extra balloons and daggers, I am reliably informed that Trogg and the entire platform network appear upside down! Higher levels contain further surprises.

But why's the program called Frak? This happens to be the comment made by Trogg every time he loses one of his three lives. I understand the word means "dinner jacket" in Italian, so why he uses it I can't imagine. But the more observant may discover something interesting in the shape of the platforms on the first part of the game.

Congratulations, Nick. Frak is going to be a BBC classic.

Frak is going to be a BBC classic. The more observant may discover something interesting in the shape of the platforms on the first part of the game too.