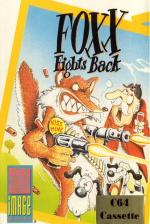 Foxx Fights Back is eminently likeable because, though we've all seen every element of the game design knocking about before, the basic scenario of a put-upon fox foraging for food in the face of violent attacks from hunters and woodland animals alike is an original one, and is carried off with some consistency and wit.

We kick off with our vulpine hero down in the lair with his fish-wife of a fox-wife, but he is soon turfed out in no uncertain terms to collect dinner "and don't you dare come back without any!"

Mr. Foxx is soon loping his way across the countryside in search of tasty morsels, though his search is by no means easy. He is armed with a revolver which he can swap for sub-machine gun or even bazooka at later points.

Only in the end levels can he walk around blasting like your standard shoot-'em-up hero. Enemies to be faced include squirrels who throw explosive nuts from overhead, flying chickens who drop bombs, badgers who lob rocks and, most bizarre of all, fox-hound bikers who approach on motorcycles, and dismount to fire.

There are various obstacles such as walls and streams that get in your way, and require a degree of jumping kill to negotiate, but you may find that instead of running you should bound along in a series of jumps most of the time anyway - it is just as fast, and can help keep you out of trouble. It takes some timing, but rather than just ducking the flying chickens, many points can be earned if you can jump in the air and catch them in your teeth.

Chickens sleeping in their coops can be gobbled up to keep you bright eyed and bushy tailed (there is a "pant-o-meter" - yes, really - at the bottom of the screen, with length of tongue showing how well you're doing) but best - and most vicious of all - is nipping down a rabbit hole to munch up dozy bunnies. These screens work just like the special coin rooms in Super Mario Bros., though without the hidden extras, and are rather fun, if totally murderous. You begin to think some of the other animals may have a point in going after Mr. Foxx after all.

Foxx Fights Back benefits from a large play area and a jolly hunting tunes-type soundtrack. The sprites are rather small, though on the whole well animated, and the scrolling is fine. The relationship between where the sprites can go and background information could be stronger though - you have to stand precariously in space to achieve any of the tougher jumps, for instance, and you are deemed to have eaten a sleeping rabbit if you come within about one and a half fox lengths of it!

All in all, one of the more fun games I've played on the C64 in a while, the cheek and imagination of the scenario being sadly a rare thing.

Not exactly a "must buy", but definitely a strong product, and one unlikely to disappoint.

One of the more fun games I've played on the C64 in a while, the cheek and imagination of the scenario being sadly a rare thing.