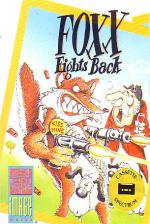 There comes a time in everyone's life when you have to decide to make a stand. You can only be oppressed, walked on and abused so much, before, one day, it all comes to the boil and you reach for the Browning in the sideboard.

For Foxx, that day has come. Fed up to the back teeth with having to move house every time the local gentry decide to dress up in the red jerkins, Foxx decides that enough is enough and with the help of a revolver it's time to redress the balance.

Despite the obvious superficial similarities to Vixen - particularly in the running of the central character - Foxx is a much more playable and really quite different game.

You start off down in your den, with the Mrs complaining about the general state of affairs. From there you take a swift leap upwards into the hostile world. For the most part the game centres around running left and right across a parallax scrolling landscape, trying to snatch apples from treetops and taking them back home to appease Mrs Foxx. Tedious? Well, it would be apart from the fact they you're fighting for your life all the lime with maniac beagles, badgers, squirrels and birds, all hell-bent on bringing about your demise.

The beagles come in two forms, pedestrian ones out to blow you to bits with machine guns, and those on motorbikes, who will simply run you down. The squirrels and badgers throw grenades at you and the birds drop, er, bombs. Yes, I know it all sounds a bit like a Beatrix Potter story gone mad, but believe me, it's great fun. You belt around, collecting apples, shooting beagles in the head and catching the birds between your teeth as they fly over.

Along the way, you'll encounter numerous hazards like truly gruesome mantraps which will literally make mincemeat out of you. There are nasty rivers and lakes to negotiate too, and you'll have to get your jumping pretty well off pat if you are going to get anywhere at all.

The more tired you get, the longer the tongue of your Pant-o-meter becomes, until eventually you peg out. Obviously, your constitution isn't boosted by being run over by a rabid beagle on a motorcross bike or falling into the clutches of a grenade launching squirrel.

To help you out along the way, a couple of more advanced weapons have been left at strategic points. There's a Thompson sub-machine gun and even a bazooka, both of which will help to despatch the bad guys at a swifter pace.

You can progress to later levels by collecting enough apples. All the time, life becomes tougher and tougher There is a bizarre bonus level which involves jumping down a rabbit warren and eating all these fluffy white rabbits.

Graphically, Foxx is pretty good, although the characters aren't actually very large on the screen, the animation is very nicely done and the beagles on the bikes really have to be seen to be believed.

There's a strange sense of humour throughout, but thankfully it doesn't detract from the grand level of violence. It's a corker.

Comedy shoot-out without a hint of naff-ness. Good graphics and an amusing style.