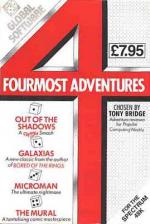 The titles of this tape should be the easiest adventure clue you ever have to solve as you try to work out what you are getting for your money. Yes, it's the first adventure compilation tape consisting of four games selected by Tony Bridge, the adventure columnist for Popular Computing Weekly. The games - three traditional text input stories plus a role-playing game - are nothing exceptional but there is certainly enough in the package to keep you quiet for a few weeks.

The pick of the games is Out Of The Shadows, the role-playing game. You can choose to be a dwarf, elf or human, all of whom have slightly different characteristics as you go on one of six predetermined quests, or a random one. You must explore wilderness and dungeons, fighting monsters and picking up treasure and other useful items. A small map displays everything that you can see as you wander round taking care not to bump into trees or fall down holes. Time passes throughout the game and you will need a light source if you are to find your way round in the darkness or down a dungeon.

There are items to be purchased - if you can find a merchant and experience points to be gained as you defeat the various monsters. How much damage you inflict depends on the weapon you are carrying (if any). You start off with just your bare hands and finding a club or similar or buying one must be one of your first priorities. Food is also important as you strive to replenish your sapping strength.

Commands are input as single words although some need further clarification e.g. use club or buy helmet.

The main problem with Out Of The Shadows is that you tend to get killed off too quickly at the start of a game before you can get your character established, but even so, it is not a bad game at all, especially if you enjoy the role-playing type of which there is a distinct lack on the Spectrum.

Project X: The Microman is a Quilled/Illustrator/Patch production which sees you, Professor Richards, having shrunk after receiving a massive dose of gamma radiation. Everyday objects present a whole new set of problems and your only hope is to find a colleague's laboratory and overcome the lab's anti-intruder system controlled by the COM-2 computer system.

Although there are some nice - and at times startling - sound effects, the game is let down by a poor vocabulary. One nice feature is the use of the store/recall commands which takes a snapshot of your current position without having to save to tape.

Galaxias is an early Quilled adventure by Fergus McNeill who shot to fame with his Robin Of Sherlock and Bored Of The Rings spoof adventures. The most startling thing about Galaxias is its futuristic character set - quite unlike anything you've seen before. You play a space pirate trying to find the crystal of something or other. Starting in the Zagro spaceport, you must pilot your space cruiser around various planets - the onboard computer gives you considerable assistance here. There are also some nice amusing touches, a forerunner of the humour seen in Fergus' later games.

The final game of the tetralogy is The Mural, which features some strange Monty Python-type humour. How many other games do you know which start of with you being accosted in Neasden by two men wearing suspender belts and which feaures books such as Ethel The Aardvark Goes Quantity Surveying and the Karma Sutra For Gerbils. On the whole though, this is a poor game with a limited vocabulary and a user-friendly approach.

As I said earlier, Fourmost Adventures is a fair if somewhat uninspired collection of games and I still feel that you would get more pleasure out of a good Level 9 game. Now, if *they* were to bring out a compilation...

A fair if somewhat uninspired collection of games... I feel that you would get more pleasure out of one good Level 9 game.
Logout