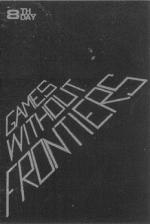 8th Day were one of the first companies to see the potential of The Quill for budget software. In 1984 they released six adventures, most of them very good for the time, adventures which I regard with particular affection, since they were among the first I ever reviewed (for the late Home Computing Weekly). Yet - despite the controversial and excellent, full-priced HRH last year - 8th Day have received the success they deserved.

Now the company is back with new versions of those original games. Graphics have been added, and text compressed to allow longer description. Players are offered a choice of graphics or an expanded text version. New features like RAMSAVE/LOAD are included and presentation has been polished. The updated games are being released at the rate of one per month.

Unfortunately, 8th Day have chosen one of the weakest games to start with. The plot: bacteriological warfare has wiped out most of the world's population. You and a few others were immune. Find such people, and together begin a safe new world, de-arm the local nuclear weapons to help this aim.

This scenario was not very well executed to start with, and the game has not been sufficiently revamped. The vocabulary is too tight, and you are far too limited as to what you can do. The graphics are poor, the description uninspiring and the other characters have virtually no life or independence.

Thumbs down for this one, but I look forward to coming games, especially Quann Tulla and Faerie. I just hope they are updated with more thought.

Thumbs down for this one, but I look forward to coming games. I just hope they are updated with more thought.