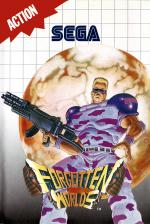 When two dudes fly into enemy territory armed with a couple of laser rifles and towing floating grenade launchers, you know that there's trouble brewing.

And indeed there is. These two guys are on a mission to hunt down and destroy an evil villain who is plotting the destruction of the entire universe. Between you and him are horizontally scrolling levels that are packed with all sorts of horribly aggressive baddies and, of course, a huge end-of-level creature.

When aliens are blasted, they sometimes leave behind blue Zenny, the local currency which can be picked up and added to the player's cash total. Occasionally a shop pops up from underground, and the two fighters can enter and spend their dosh on the latest weaponry, better armour or even extra energy to heal their battle scars.

Although Forgotten Worlds is a very slick program which grabs you instantly and keeps you playing. It has two annoying little niggles: in two-player mode you have unlimited credits (which means you can finish it first go, even if you do get a pathetic score) and if you play one-player, the game is just a little too easy on the standard setting. To get a decent challenge you have to set the difficulty level on the option screen to "hard", instead of "normal". Why not have "hard" as the "normal" level and have the "normal" level as "easy", so rubbish players could switch to it if they get nowhere?

Still, the action isn't ruined by these annoyances, and as long as you remember to select the hard difficulty level when you play, Forgotten Worlds is a superb shoot-'em-up which should keep Megadrive massacure maniacs more than happy.

A very polished shoot-'em-up that offers plenty of action and some great graphics and sounds.

As long as you select the "hard" difficulty level on the options screen, it's a demanding blaster that should keep trigger-happy players very happy.

A very polished shoot-'em-up that offers plenty of action and some great graphics and sounds.