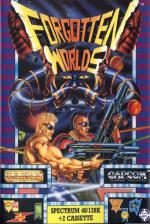 I must admit, I wasn't too sure about this one. As I remembered it, the Capcom original was simply too fast, too frantic and too flash to make much sense on the Speccy.

I'm still humming and ha-ing about it. Don't get me wrong, it's a very good game by any standard, you can clearly see the effort that's been put in here. It's all very colourful (mainly red), well-paced and atmospheric, with lovely smooth scrolling. We're looking at top notch Speccy programming, all right.

However, two things worry me; the first being the control mechanism, the second being the way your lives are connected to a slowly falling energy level - a system I feel works far better in the arcade. Each hit you take saps only a tiny portion of your energy, of which you have quite a lot, so the immediate fear of dying is taken away. But when your energy does eventually run out, it comes as a surprise and you're left saying 'What hit me?' It's uncomfortably close to the pointlessness of playing a game with an infinite lives cheat mode.

Otherwise the game is fab, one of the very best shoot-'em-ups, if not quite up to the standard of the marvellous R-Type. There you are, flying along with your jet pack and a big gun, shooting everything that comes your way. All fine and dandy, set as it is against an intricate backdrop of crumbling post-apocalyptic skyscrapers, with the occasional smattering of tubing, spinning cog wheels and other industrial stuff thrown in. In fact, not unlike a recurring nightmare I used to have when I was about five years old (but that's another story!).

Touch the cogs or the moving walls and your energy level drops frighteningly, but not half as badly as it does if you plough into the waves of aliens that come right at you. These start as little space ships that come in predictable attack patterns and are easily lined up and disposed of, but soon get far larger, more varied and trickier.

As normal with these things you start off rather under-armed, but soon fix this by visiting one of the handy weapons shops that pop out of the ground below you. Here you can spend the little blue tokens you've hopefully collected from dead aliens on things like four way lasers, first aid and the like. One of the best is a ball thing that floats in front of you, protecting you from aliens and firing in all directions.

This is particularly useful for taking out the most bizarre of the alien waves, a nightmarish dance of what looks like a giant geometry set. Sit in the middle of the circle that these dancing set squares, compasses and protractors form and you'll be able to do a fair amount of damage without too much risk to yourself.

Finally you get a large end-of-level alien, which from my experience didn't tend to do much, but was very hard to kill. There are four of these ('cos there are four levels, see) and from playing the arcade I should think the Smoke Dragon is the meanest, though on the Speccy who can tell?

Playing Forgotten Worlds is a bit of a strange experience in that for much of the time you feel like a pinball on a giant table, wacked out of control by aliens, bounced around by the giant cogs (they suck you in and bash you about a bit) and your own ineptitude with the control mechanism. It's a bit of a different experience from most Spectrum shoot-'em-ups, much more "arcade-like" in feel and, despite my few quibbles, easily ranks amongst the best blasting games.

Fast moving and complex shoot 'em up, slightly marred by difficult controls and a lack of real tension.

This easily ranks amongst the best blasting games... A fast-moving and complex shoot-'em-up, slightly marred by difficult controls and a lack of real tension.