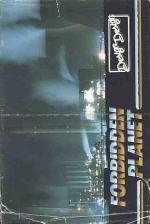 After a lot of trogging around, space baffling and generally flying through rectangles in Dark Star, the hero of that game (you) now needs to collect a message from the Forbidden Planet. It's not any old message though, oh no, this message is the Evil Lord's message. A message from a being still evil but no longer lord, this is the state of affairs he wants to change and by using his message he should be able to reinstate himself in power. The Evil Lord's message is a statement so devastating that it proves he's the only one fit to rule, so it's rather important he isn't in possession of it. Since it's such a really valuable commodity the Evil Lord has split, encrypted and distributed the code throughout a heavily garrisoned world the defences of which are near perfect.

Fortunate, then, that your fighting equipment is the very best to be found. The ship you fly is controlled similarly to the one in Dark Star but due to the increased graphic prettiness of its lasers is far superior. A decoding computer is also supplied for the decryption of any code pieces collected.

There are three types of enemy structure dedicated to your destruction. The first and most obvious are the tower structures firing laser pulses your way. A pulse can be dodged or destroyed with a modicum of talent. To put a tower out for the count a fair splashing of laser light is needed. Once well and truly trounced they retract into the surface. Guided missiles are most deadly, these are very hard to dodge and need a good zap to stop their hull-piercing activities.

These are often launched from pole structures rising from planetary fortresses, that instantly retract into their housings once the missiles are on course. Third of the death dealing alien structures are the squat versions of towers that launch laser pulses your way. Hefty amounts of laser fire should neutralise these outposts.

These are the actively aggressive defences. Just as annoying, if not even more so, are the passive lines of defence. Within various areas of Forbidden Planet your ship's movements are strictly limited by the plasma ducts and force field networks. It is possible to totally ignore the field structures, but it's really the equivalent of flying through brick walls.

The player's interface with the real world of Forbidden Planet is achieved using a highly sophisticated scanner. This represents various objects with coloured vector graphics. The main action takes place over the planet's surface. Points of light on the planet surface convey the main feeling of 3D experienced. Very handy is the scanner's ability to show a representation of the various holes in the constraining force fields. Using the directional keys you move a gunsight around the main display, as the gunsight moves the attitude changes to follow the gunsight. Also for ship control a simple speed adjustment system is supplied. Two keys, one for an increase in velocity and the other to decelerate.

Each time your ship is hit there is a corresponding decrease in energy, and running out altogether ends the game. The health and condition of your power banks are constantly displayed via the krell meters along the lower part of the visual display. Another quick way to energy depreciation and death is flying into the invisible force walls. Every wall does have a hole in it, though, and this is highlighted by the ship's computer, a clever piece of machinery that also shows any scenery behind the holes. The enemy are aware of your computer's sophistication and set up dummy holes in the dislocation zones. Flying through here instead of taking the course through the correct force gap also gives your shields a fair battering.

A map screen is supplied to give details of your location and direction. The scope of the map is a little limited though it does contain a key. Your position is marked by an arrow that points the current direction you are taking. Any nearby code stores are displayed on the map screen and if you do get into a screen containing such an item, flying into the object releases its contents to your ship's computer.

Unluckily the original message was fragmented into quite a few parts. Retrieval of the whole is extremely difficult but if you do manage to end the game you need to return to the start position. Also worth mentioning is Spectacle II, another program contained on the tape along with Forbidden Planer that needs a password to access it. No doubt Design Design will eventually release the password. What you will find is as yet unknown but it's likely to be entertaining.

Control keys: entirely definable as to key and function
Joystick: Kempston
Keyboard play: excellent
Use of colour: greatly improved on Dark Star
Graphics: more of them too, fast vectors
Sound: un-Brattelian, which is to say there is some

'What has Simon Brattel been doing for the past year? Anyway Forbidden Planet has been a long time coming and it is definitely worth the wait. The graphics are in the same vein as Dark Star but they have been improved upon and also in this game you get noises all the time you are playing. Forbidden Planet is fun to play but it does take a while to get into. I'm sure that after a few goes most people would be addicted. One of the better features of this game is the hi-score table which responds just like the one in Dark Star. Also the define keys option allows you to program as many keys as you want to do what you want, for instance, it's possible to program a key to fire, go up and go left at the same time. On the whole this is a very enjoyable game, though initially similar to Dark Star, it proves to be very addictive. Definitely one for any Dark Star freaks out there'

'Okay, everyone, if you didn't like Dark Star there's no way you'll like this. All it is really is an updated version of it. But updated all the same, it's still very good. I liked Dark Star- in fact I still play it from time to time, so I think Forbidden Planet is great. I noticed the front end has been reduced a bit, but I still enjoy the moral pleasure of seeing the colourful explosions after having totally obliterated an alien'

'This follows on from Dark Star, and if you didn't look at the inlay you might think it WAS Dark Star. There's a new storyline and a few extras thrown in. The map is good, and colour is used very well - really splashed about in places, and there's plenty of sound, with good explosions and firing noises. I found the game wasn't all that addictive, and a bit of a let down overall.'

The map is good, and colour is used very well - really splashed about in places, and there's plenty of sound, with good explosions and firing noises. However, I found the game wasn't all that addictive, and a bit of a let down overall.