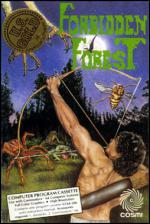 From the first batch of new American products to hit our shores, Forbidden Forest shows that the US is making some brave attempts to escape from the arcade game strait-jacket.

You control a little archer beset by monsters in an enchanted wood. The archer's bow is loaded and fired by alternate presses of the joystick fire button. The stick is used to aim the bow, which is no easy matter. The game has a sense of depth, so you can fire back 'into the screen'. Getting the right angle left/right and up/down takes learning; however, it is possible to run right and left by continuing to push the joystick when the bow has reached either of its left or right limits. I did a lot of running.

It's a very clumsy game control system but the lack of playability is compensated for by some fine graphics and music. The background is in the best Disney tradition and consists of separate landscape planes which move past very convincingly as you do. The moon rises and sets, the stars come out and twinkle away. All this is set to SID chip-stretching sounds, a separate theme tune for each enemy. The monsters come in eight levels - I got through spiders, a large bee, toads and a dragon. They don't look as good as the background but you don't get much chance to stop and examine them. When you've cleared a screen of monsters the archer does a cute little disco number.

For attention to detail, this is great, I just found actually playing it a bit of a chore.

For attention to detail, this is great, I just found actually playing it a bit of a chore.