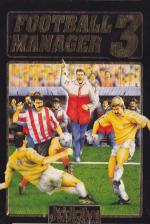 Football Manager 3 | Can You 'Manage' This Little Lot? | Verdict 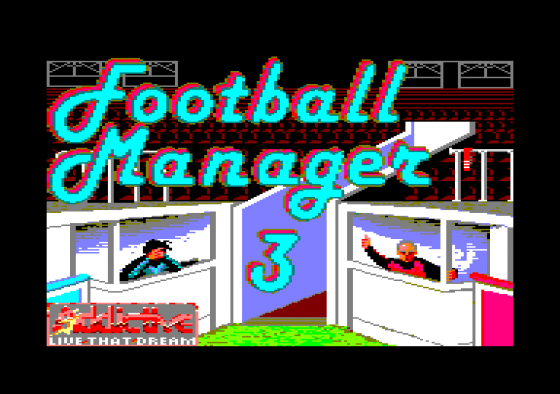 I like football management simulators. There, I've said it. Whole civilisations will pour scorn on me now. Young children will laugh at me in the street. [They do that already though, Adam - Ed] But I'm not ashamed. I will say it loud and proud: I like footie management sims. I've served my time with ten season stretches on Soccer Boss and Football Manager 2. I led a play-by-mail team through to League Cup success in their first season. I'm not one of those people (and there are plenty of them reviewing computer games) that disses all management sims as "boring reems of statistics for transporters only". Not me. I know the score.

All of which means that the following words are said neither lightly nor joyfully... Football Manager 3 is crap. Unutterable crap.

But how can this have happened? Football Manager 2 was probably the best footie manager game ever (only Kenny Dalglish Soccer Manager pushes it close). It featured loads of options, sensibly detailed player attributes, a transfer market at just the right level of buoyancy, plenty of scope for tactical thought, and - best of all - match highlights that were genuinely exciting (at least some of the time): real on-the-edge-of-your-seat stuff. 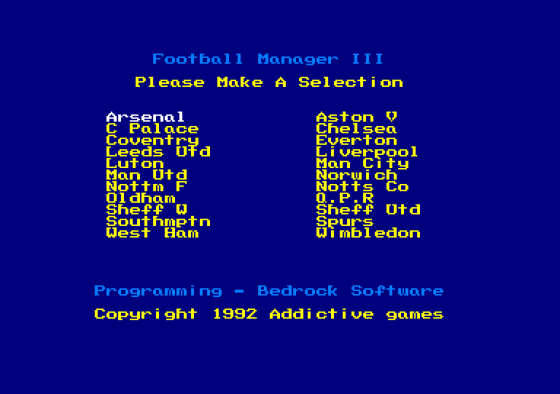 Football Manager 3 has none of these. It has very few options, tons of totally unnecessary and, frankly over the top, guff about the individual players: yeah, like people have got the patience to move all those little bars around to train their players.

The transfer market is crap: you have to pay above, rather than below, the asking price. There is virtually no scope for any sort of thought at all, let alone tactical. And the match highlights? Don't make me cry. Tiny sprites jerking around in slow motion for hours on end with nothing at all happening (you probably wouldn't be able to see it if anything was happening).

As a special bonus, the end of the game comes instantly unless you keep an eagle eye on your cash. Bust your overdraft limit and that's it. No warnings. No re-negotiations. A little memo pops up telling you to load the game again as you've just lost. Twig off. 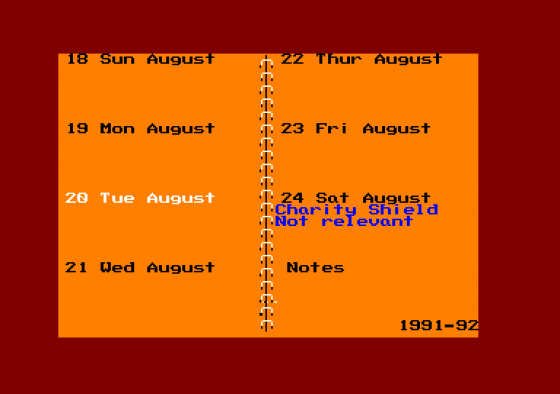 The masterful hand of Kevin Toms is no longer at the wheel, and the Football Manager series careers off course ignominiously. Like The Beatles reforming to perform Kylie Minogue songs or James Dean returning from the grave to star in a Carry On film, this kind of thing is both unthinkable and very sad. The bottom line is: Football Manager 3 is virtually unplayable. Buy Football Manager 2 (available for £3.99 on the electronic duplication system at large John Menzies stores) instead. And if you've already got it, then that's even more reason to give Football Manager 3 a wide berth.

The Office
This is where it all happens. Or at least, this is the starting point for making things happen. The office is the equivalent of a main menu: from here you can select items like the diary or the filing cabinet which lead you to the separate option and information screens. Sadly, it's not a real iconed-up menu system: you don't click on your chosen item, you just have to lug the joystick left and right to highlight the item that is required.

The Transfer Market
What a motley collection of young men this lot are. The ones in the top half of the screen are your team, hoping that you won't click on them (to put them up for sale). In the bottom half of the screen are the Prima Donnas and old codgers that you could buy if you had enough money. Click on your target, check out their vital statistics, then jiggle about with those figures (transfer fee, player's wage, appearance fee) to strike a deal.

Finances
The Board (a lot of grumpy old men in ill-fitting suits) look after the cash. Well, they should do, but you don't need to ask them before you spend it all. Beware that overdraft limit - sneak just a smidgeon over it and the game's over (we're not talking the Friendly Bank here). The screen also gives a breakdown of the profit and loss that's occurred since you last had a look at the books. It's purely an information screen, this one.

Memos
Hmmm, not a lot happening here really. You've got to read the memos, otherwise they just stay cluttering up your desk, but mostly it's just the scout telling you who's on the transfer market ("we already know mister scout, we've looked") and the bank manager informing you that your overdraft has been increased by £6 ("cheers, mister bank manager"). Important memos ("you're sacked", "you've died horribly") pop up automatically.

The Filing Cabinet
The filing cabinet contains records of all your players. Not criminal records sadly, the cabinet probably isn't big enough. What you get is information like their wage, their age, details of all their different skills, a lovely little picture of them, and much, much more. And if you get bored of snooping on your players, there's a manager's record in here too. It details your performance to date. Chances are it won't make for pleasant bedtime reading.

Team Formation
An opportunity to fiddle about with your team (ooer). You can move players about, trying them in different positions... er, on the field... er, in the team: midfield, defence and stuff. If you want to add someone to the team, you've got to kick someone else out of it first. Click on the little icons and you can drag players around the pitch. It's almost a game in itself. (In fact, it might even be a better game than the one you've bought!)

The Computer
It's terribly hi-tech in the world of domestic soccer now you know. Vital information such as the league tables, fixtures and the club history are stored on a database on your trusty old PC. As long as we can get through the season without the machine crashing or catching a virus, I'll be happy... Incidentally, First Division Manager from Codemasters was the first CPC footie sim to go for both the computer and the graphic menu screen.

Team Training
Well, it's called team training, but each player undergoes their own individual routine. Select a player and a screen like this appears. Jiggle about the blue bars to specify the amount of training in each separate area (and the amount of rest). The red bars show the player's current level of ability in each area. Giving extra training in the areas that they're weakest in seems like a pretty sensible tactic to me. What do you reckon, readers?

The Diary
Where would a football manager be without his diary? Probably in the wrong place at the wrong time. This useful little book keeps track of all those important little events. (Like football matches and stuff.) You can flick back and forth through the pages for the whole season, in case you ever feel the need to know who you're playing on March 7th. Strangely enough, the game begins in the 1991-2 season (pre-Premier League). Hmmm, curious...

The Match
Aha! The animated match action sequences. Hurrah! Um... so has the game started yet then? Unfortunately, the match sequences in Football Manager 3 are almost stunningly bad. Lots of tiny little sprites jerking around the screen for what seems like eternity. Frankly, I don't care if we win or lose, I just want this over with. These bits should be the most exciting part of the game. They're not. They are truly irritating, and the biggest nail in Football Manager 3's coffin.

Graphics 46%
Class 3B of Hinchley Wood Primary School have done a terrific job! A bit garish and quite primitive.

Sonics 2%
Not a lot going down in this department, but what do you expect? It's a management game, dudes.

Staying Power 15%
...but the moment you have to sit through some match highlights, you'll give up and go and watch TV.

Overall 38%
Football Manager 3 will give Gone With The Wind a good run for its money in the tearduct stakes.

Football Manager 3 | Can You 'Manage' This Little Lot? | Verdict

Football Manager 3 is crap. Unutterable crap. The masterful hand of Kevin Toms is no longer at the wheel, and the series careers off course ignominiously. 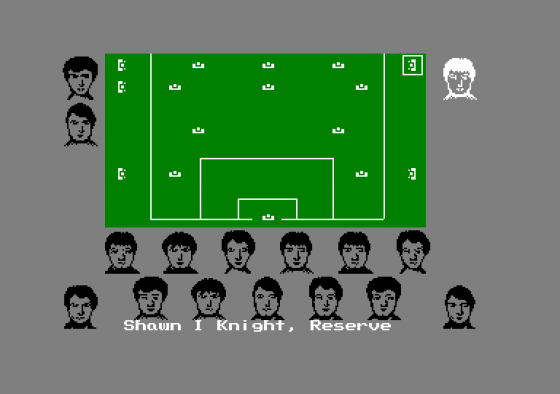